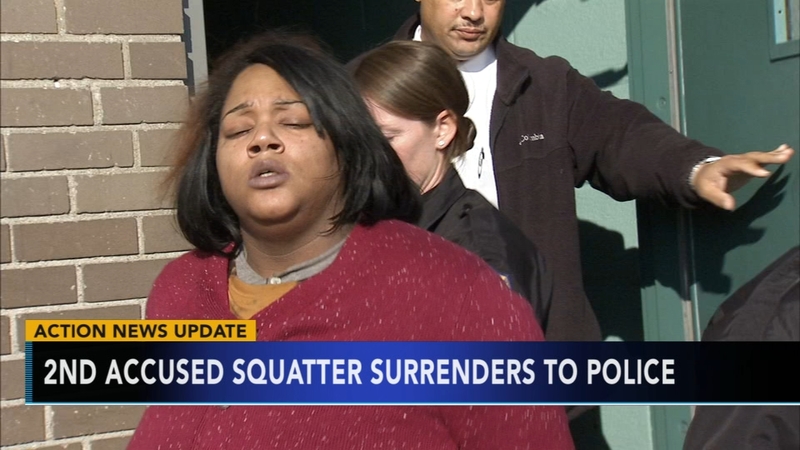 PHILADELPHIA (WPVI) -- A second accused squatter is under arrest just days after Action News reported that police were searching for the two women.

Police say our exclusive investigation into squatters stealing Philadelphia homes gave them the evidence they needed to seek arrest warrants for Tanisha Diaz and her alleged accomplice, Kadijah Catley.

Police say they immediately got tip calls after our report on Tuesday night. Catley turned herself in on Wednesday, and on Thursday Diaz did the same.

She talked to Action News as she was led to a police van.

Investigators say our story from August gave them the proof they needed to bring charges against Catley and Diaz. Our report revealed how these illegal trespassers are stealing homes across the city.

We spoke to Diaz after we found her living illegally in a Northeast Philadelphia home over the summer.

"It's all over the place," said Diaz. "They doing it everywhere you go."

Diaz told us she drilled out the locks of a home she didn't own.

The homeowner, Matthew Waychoff, said Diaz and the other squatters refused to leave his house unless he paid them cash.

"I'm not going to negotiate with a terrorist," said Waychoff.

Waychoff, and other homeowners like the McGees, said they've been victimized by squatters.
"We feel like we are the criminals," said Don McGee.

But both said they'd been told there was little police could do. That was until law enforcement saw our report.

"That opened our eyes and gave us the probable cause with the DA's office to go after her for the extortion and the other related offenses," said Philadelphia Police Lt. Dennis Rosenbaum.

Police said after seeing our interview with Diaz, and the Facebook video we showed of her taking an expensive vacation to Miami, they had enough evidence to put Diaz behind bars.

"She just flat out didn't care, and was bold, just bold," said Rosenbaum. "I immediately contacted the District Attorney's office, and was able to work with them and Detective Sullivan to get the arrest warrant together."

Diaz and Catley were wanted for extortion, burglary, and criminal trespass.

"We obviously caught on to their game and now we are cracking down," said Rosenbaum.

Lt. Rosenbaum said police are now working on changing their policies so they can remove anyone illegally occupying a home.
They said they hope this case will serve as a warning to other would-be squatters.