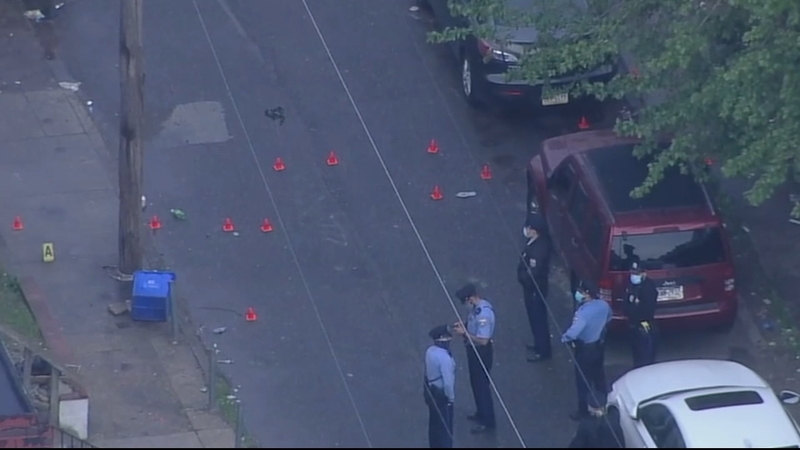 PHILADELPHIA (WPVI) -- Seven people are dead in a violent weekend in Philadelphia that saw more than 20 people shot. The violence included a quintuple shooting in Olney and a triple shooting in Kensington. People were killed in both incidents.

Twenty-five people were shot in 14 separate incidents this weekend. Investigators recovered a total of 121 bullet casings.

"I'm devastated by the unspeakable violence that occurred this weekend across our city. My thoughts are with the victims and their families during this tragic time, and I want all Philadelphians to know that our Administration does not take this issue lightly. No priority is greater for us than reducing violence and creating a safer and more just city for us all," said Mayor Jim Kenney in a statement.

Dr. Dorothy Johnson-Speight, with the violence prevention nonprofit Mothers in Charge, can relate to the scores of families suffering. Her son was killed by gun violence.

"It's pain, like, I can't even begin to explain it. I've lived it, but I'm living it and seeing it all over again with the number of families that come to us every single day," she says.

Below is a roundup of some of the weekend shootings:

One person was killed in a triple shooting in the Kensington section of Philadelphia.

One person was killed in a triple shooting in the Kensington section of Philadelphia, capping the violent weekend in the city.

It happened around 11:40 p.m. Sunday outside the King Deli Grocery Store on the 3200 block of G Street.

All three victims were taken to the hospital. One was pronounced dead a short time later. The two others were listed in stable condition.

A 20-year-old man was shot in the 3400 block of Spruce Street. He was taken to the hospital in stable condition.

Police say a 31-year-old man was shot multiple times in the city's Frankford section. The shooting happened just after 9 a.m. Saturday along the 1600 block of Granite Street.

The victim, a 23-year-old man, was shot multiple times across the body. He's listed in stable condition at Penn Presbyterian Medical Center.

Another shooting took place on Marvine and Poplar streets in North Philadelphia. A 21-year-old victim was taken to the hospital in stable condition.

Just before 4 p.m., police were called to the 2300 block of South 66th Street in Southwest Philadelphia for a double shooting.

A 20-year-old man was shot and killed around 7:55 p.m. on the 1700 block of West Ruscomb Street in Logan. Police say the man was shot once in the head. He was pronounced dead at the scene.

A 37-year-old man had emergency surgery following a double shooting in Southwest Philadelphia.

Action News captured the scene outside the emergency room when the man and a 44-year-old woman were brought in for gunshot wounds.

Investigators say they were leaving a tavern when gunfire erupted on the 5400 block of Woodland Avenue around 1 a.m. Sunday.

Police say another man was shot around 1:04 p.m. on the 2600 block of Felton Street. Officials say he is expected to survive his injuries.

Around 1:30 p.m. Sunday, police say a gunman opened fire on three male teenagers inside a light blue Nissan on the 2800 block of North 21st Street.

One person is dead and two others are injured after a gunman opened fire into a vehicle on Sunday afternoon in North Philadelphia.

Police say one of the teens was shot in the head. He was rushed to an area hospital where he later died.

A 19-year-old man suffered eight gunshot wounds to the torso, police said. He was transported to Temple University Hospital where he is listed in extremely critical condition.

A third victim, an 18-year-old man, was shot in the left arm. He was transported to an area hospital where he's listed in stable condition.

Less than 10 minutes later, a 28-year-old man was shot two times on the 600 block of E. Wishart Street. He was taken to an area hospital in critical condition.

Police were called to the city's Olney section after five men were shot on the 100 block of East Albanus Street just before 4:30 p.m. Sunday.

Around the same time as the quintuple shooting, police say a 34-year-old man was shot multiple times on the 2200 block of Cecil B. Moore Avenue. There was no word on his condition.

Three people were also stabbed in separate incidents during the violence this weekend.

Police are looking for the woman who robbed and stabbed a 66-year-old man in Southwest Philadelphia.

In one incident, police are looking for the woman who robbed and stabbed a 66-year-old man in Southwest Philadelphia.

It happened around midnight Sunday in the 1800 block of South 68th Street.

Police say the woman stole $40 from the man, then stabbed him multiple times in the face and upper body. He remains in critical condition.

In another incident, a 44-year-old man was found stabbed in the chest around 10:41 a.m. Sunday on the 200 block East Ontario Street in North Philadelphia.

He was taken to Temple University Hospital by police. The man was listed in critical condition.

"I'm devastated by the unspeakable violence that occurred this weekend across our city. My thoughts are with the victims and their families during this tragic time, and I want all Philadelphians to know that our Administration does not take this issue lightly. No priority is greater for us than reducing violence and creating a safer and more just city for us all.

We are committed to investing as much money as possible back into our communities to prevent gun violence. It's a key part of the $18.7 million in additional funding for anti-violence initiatives we proposed for next fiscal year. Over five years, we're planning to increase our investment in proven violence reduction strategies by $70 million.

$1.3 million in new money for the expansion of the Group Violence Intervention strategy and the Community Crisis Intervention Program, which would make for a total investment of $6.6 million in FY22 for these two efforts.

The Targeted Community Investment Grant (TCIG) program will receive $500,000 in additional funding - nearly double the FY21 allotment. To date, the TCIG program has already provided more than $2 million in funding in grassroots violence reduction programs, with about $400,000 awarded just weeks ago, to support 30 programs.

These and other evidence-based strategies are available in the updated Roadmap for Safer Communities Plan we released last month, and on this post on phila.gov -- 10 Things the City is Doing Right Now to Combat Gun Violence."