DA Larry Krasner is under fire after he said there was no "crisis of crime" in Philadelphia.
WPVI
By TaRhonda Thomas 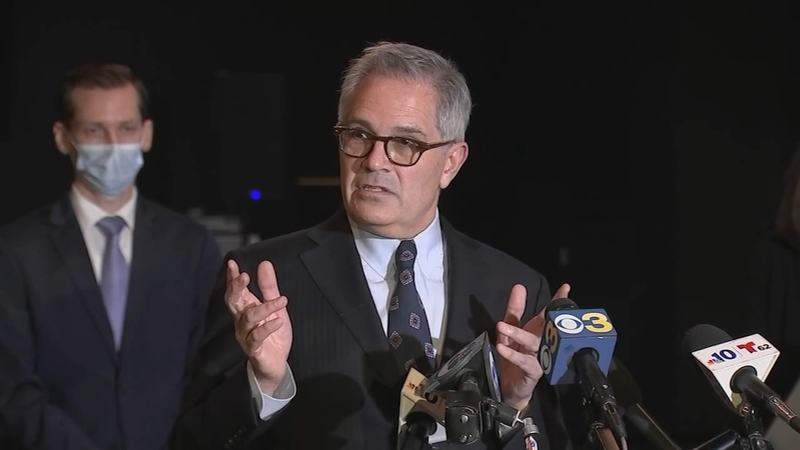 PHILADELPHIA (WPVI) -- After backlash from a statement he made on Monday, Philadelphia District Attorney Larry Krasner is looking to clear the air.

It all comes after Krasner said that there was no "crisis of crime" in Philadelphia.

The original statement was delivered in response to a question at a press conference on Monday. Krasner was asked about whether tourists and shoppers can feel safe in the city.

As the founder of Mothers in Charge, an organization that helps the families of many homicide victims, Dr. Dorothy Johnson-Speight was taken aback by Krasner's comment.

"To say we don't have a crisis, really? How could you dare," said Speight, who lost her son to gun violence. "I wanted to cry (after hearing Krasner's statement) because I felt the pain of all the families that have lost loved ones senselessly in this city."

As of Thursday afternoon, there have been 524 homicides so far in Philadelphia.

It touched a nerve even with former Philadelphia Mayor Michael Nutter, who rarely - if ever - criticizes the current administration. He replied to Krasner's comment by writing an op-ed in the Philadelphia Inquirer on Wednesday.

"It takes a certain audacity of ignorance and white privilege to say that right now," Nutter wrote of Krasner's statement.

Thursday afternoon, Krasner issued a statement on the issue. In it, he partially blamed the media for editing his comments down to sound bites.

Krasner, though, did take responsibility for even that portion of the sound bite. Krasner wrote, in part:

"I know that some inarticulate things I said earlier this week have offended people. The message conveyed through media sound bites is not at all what I meant. Complete answers based on data aimed at solutions to gun violence will be edited down to sound bites. It's my job to make sure even those sound bites are careful. As someone whose strong support is owed in part to the fact that I don't communicate or make decisions like a career politician, it is my obligation to do better."

Krasner's ill-fated statement came as he tried to make the point that "overall crime" is down, even though homicides are up.

"How many more Black and brown people, and others, would have to be gunned down in our streets daily to meet your definition of a "crisis"?" asked Nutter in his op-ed.

In his statement, Krasner says his office cares deeply about victims and survivors. He says stopping the crime calls for "real solutions that prevent the next victimization of people who are mostly Black, brown, and poor." He says, nationally and locally, prevention programs have been stripped away.

Johnson-Speight says as Krasner continues to work on solutions, he should consider his words carefully.

"Let's not just think about tourism or what the city looks like, think about the families that have been impacted by the violence in the city."

In his op-ed, Nutter accused Krasner of having an "anti-police narrative" and not prosecuting criminals.