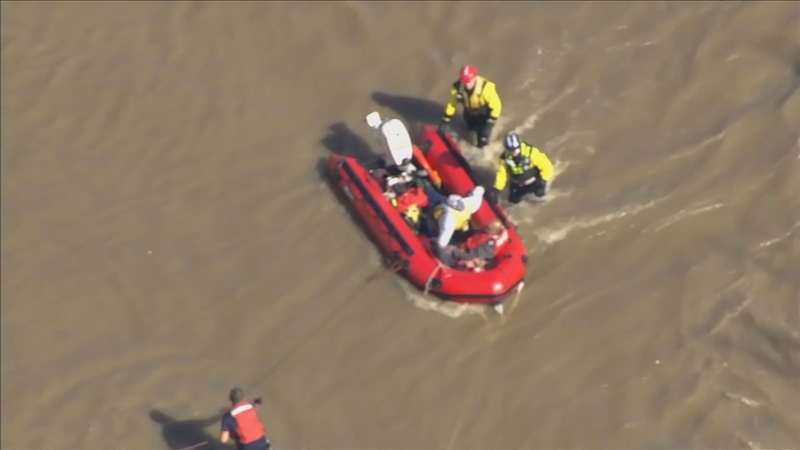 The neighborhood near 79th and Lindbergh Boulevard became a raging river when the Darby Creek overflowed when Isaias hit the region.

Some residents became trapped, others were forced to evacuate during the powerful storm.

"I was sitting in my living room and I was telling my husband water is coming through the back. It was already flooded. Then the police captain came and told us to evacuate. My house is flooded," said Tanya Andrews.

Vincent Grant and Ruby Wallace moved manhole covers back over an open sewer after they were washed away by the fast-moving floodwaters.

79th and Lindbergh is under water. Multiple buildings from an apartment complex near Darby Creek have flooded. @6abc pic.twitter.com/xUDA52ejAP

79th and Lindbergh is under water. Multiple buildings from an apartment complex near Darby Creek have flooded. @6abc pic.twitter.com/xUDA52ejAP

"These are heavy and they floated right off of here. A police officer and two firefighters fell down in there," they both said.

An Action News viewer captured one of those officers wading to shallower waters, moments after he slipped.

"They were just surprised because you're walking, you don't see anything," said Wallace.

The fire department had double the call volume as hundreds of homes in this vicinity were impacted. Dozens of water rescues were made and several residents were forced to evacuate.

"One of the things we will have to do overnight is go in here and check the utilities and find if there's anyone in there that we don't know about," said Philadelphia Fire Commissioner Adam Thiel.
Report a correction or typo
Related topics:
philadelphiafloodingweatherflash floodingsevere weather
Copyright © 2022 WPVI-TV. All Rights Reserved.
TOP STORIES
Police surround home after man claims he possibly shot someone
AccuWeather Alert: Snowy Thursday Morning Commute
Police: Woman beaten to death with pipe in Old City
Woman stuck in bathroom for days gets saved by neighbor
2 dead, 3 firefighters injured in South Jersey crash
Philly officials announce increase of violence prevention resources
Supreme Court allows Jan. 6 committee to get Trump documents
Show More
US to distribute free at-home tests, N95 masks: What you should know
Starbucks no longer requiring US workers to be vaccinated
Biden, 1 year in, says nation weary from COVID but in a better place
Woman says someone followed her in Center City using Apple AirTag
Clue about Gov. Murphy stumps 'Jeopardy!' contestants
More TOP STORIES News