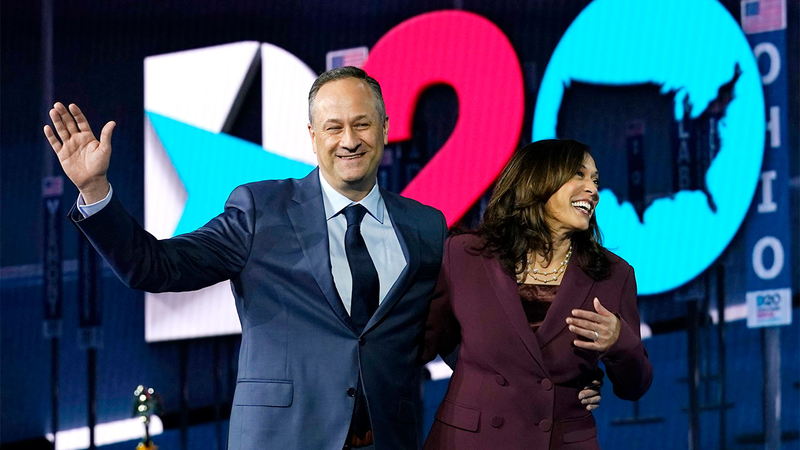 WASHINGTON -- Kamala Harris isn't the only one who made history in the 2020 election -- her husband has, too.

With Harris now sworn in as the vice president, Doug Emhoff becomes the United States' first second gentleman in the White House.

The attorney is the first Jewish spouse, of any gender, for the presidency or vice presidency.

After Joe Biden became the president-elect, based on ABC News analysis, Emhoff reacted on Twitter by posting a photo of him and Harris embracing along with the words, "So proud of you."

Emhoff said as the first second gentleman he will focus on issues involving access to justice, which he became interested in as a young lawyer.

"When I first went to court, and I would go into the Superior Court in Los Angeles downtown and I was shocked to see just lining the halls, just people ... just tugging at my -- at the time, double-breasted jacket to say you know, 'Help. Help.' It was just so impactful," he said in September.

"So for 30 years this has been sticking with me, how some are able to hire these amazing lawyers and many aren't," he added.

Emhoff has left a position as partner at a Los Angeles entertainment law firm, DLA Piper. He initially took a leave of absence in late August after Harris was selected to be Biden's running mate. He will teach at Georgetown University.

"I've enjoyed a very rewarding career as an entertainment lawyer. I'm now on leave from my firm so I can work full time with everyone else to help Joe and Kamala win," he said at a campaign event in September.

Emhoff has also drawn on his connections and headlined fundraisers and events for the Biden-Harris ticket.

Emhoff was also in the spotlight when he ran on stage during a forum in 2019 with Harris to help come between the California senator and a protester.

ABC News can characterize Joe Biden as the apparent winner in Pennsylvania -- a win that makes him president-elect.

Harris and Emhoff, both 56, married in 2014 after being set up on a blind date by a friend the previous year when Harris was California's attorney general.

In her memoir, "The Truths We Hold," Harris wrote about meeting Emhoff.

"He seemed so genuinely comfortable with himself. It's part of why I liked him immediately," she wrote.

Emhoff has two adult children, Cole and Ella, from a previous marriage, who call Harris "Momala." Harris has referred to the clan as a "modern family."

As for her own history-making bid, Harris, whose mother was Indian and father is Jamaican, has become the first female vice president and woman of color in the vice presidency. Presidential oath of office: Here's what it says for inauguration
VOTE 2020