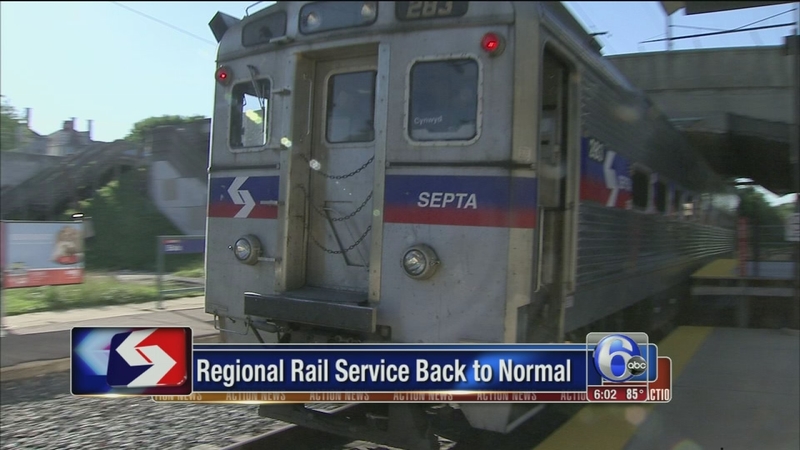 VIDEO: Regional rail back to normal

PHILADELPHIA -- Relieved commuters rode Philadelphia-area trains that operated as usual Monday after a one-day strike over the weekend that threatened to disrupt work schedules for tens of thousands of people.

The walkout ended after President Barack Obama appointed an emergency board to mediate the contract dispute between the Southeastern Pennsylvania Transportation Authority and two unions representing engineers and electricians.

About 400 workers walked off the job Saturday, shutting down 13 rail lines that carry about 60,000 passengers each weekday between Philadelphia and its suburbs in Pennsylvania, New Jersey and Delaware. Buses, subways and trolleys continued operating.

Passengers expressed relief Sunday that SEPTA's Regional Rail was back on track after a one-day strike threatened to disrupt work schedules for thousands.

The workers were required by law to return after the creation of the emergency board, which expires in 240 days. Hearings are scheduled for next week and the board will issue recommendations by July 14.

SEPTA spokeswoman Jerri Williams said all striking employees reported for work Sunday except for one, whose absence might not be strike-related, and operations ran well throughout the day. SEPTA spokeswoman Kristin Geiger said no major delays were reported during Monday's morning rush hour.

Among the regular passengers glad to see the end of the walkout was Steve Bessler, who exited a train at downtown's Suburban Station on Sunday with his dad to transfer to the subway for a Father's Day outing to the Phillies game.

Bessler said that thinking about potential commuting chaos on Monday "really did stress me for a while." His backup plan was to drive to the subway, whose lines weren't affected by the strike.

"I was dreading that because everyone else would have been doing the same thing," Bessler said.

Marc Iwanowicz, 28, said his normal 45-minute train ride from Philadelphia to his job at a suburban sporting goods store took twice that long Saturday. He said he took a combination of subway and bus because a cab ride would have been too expensive.

Brotherhood of Locomotive Engineers and Trainmen vice president Stephen Bruno said the strike could have been avoided if SEPTA had agreed to the unions' proposal of accepted binding arbitration.

SEPTA has said its offer is on par with what its other transit unions have accepted.

Engineers, whose contract expired in 2010, are seeking raises of at least 14.5 percent over five years, about 3 percentage points more than SEPTA has offered. A group of engineers outside Suburban Station said they were not allowed to comment.

Terry Gallagher, president of the International Brotherhood of Electrical Workers, said Obama's intervention was "what we were waiting for." The union's contract expired in 2009.

Obama created the three-member board at the request of Gov. Tom Corbett. If no resolution is reached, a second emergency board can be requested.

In March, Obama appointed a second presidential emergency board to resolve a dispute between New York's Metropolitan Transportation Authority and a union representing workers with the Long Island Rail Road.