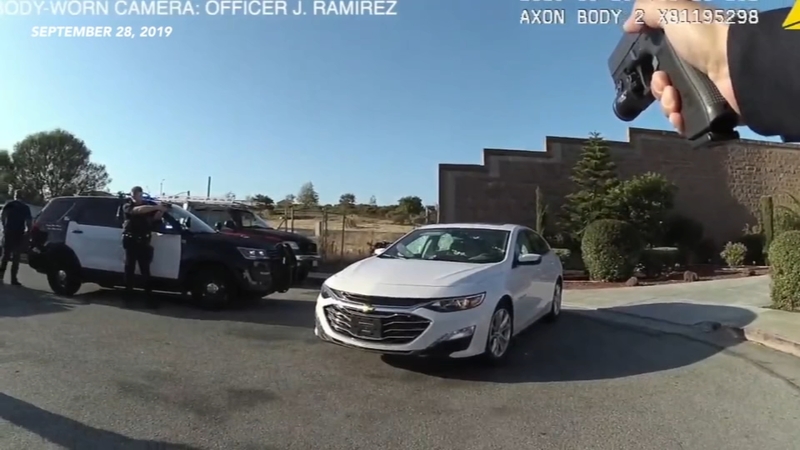 Rickita James, 30, of Newark, Delaware and 27-year-old Taleah Johnson of Philadelphia were allegedly caught on camera committing numerous thefts at a shopping center in San Mateo.

The San Mateo Police Department released video of an officer-invovled shooting invovling two women from Philadelphia and Delaware on September 28, 2019.

The San Mateo Police Department says both James and Johnson flew to Los Angeles from Philadelphia on September 26. The women then drove to Northern California and rented a Chevrolet Malibu after allegedly stealing a license plate registered to a Honda in Anaheim.

According to investigators, these suspects committed at least 11 theft-related crimes in the Southern California area.

On September 28, police say they observed the suspects illegally parked in a handicapped stall without a placard.

"The Chevrolet exited Hillsdale Shopping Center as it was being monitored and officers attempted to stop the vehicle. The suspects failed to stop and led officers on a pursuit," said police in a press release.

The police chase ended in a cul de sac, but not before police say the suspect vehicle drove toward an oncoming police vehicle and then reversed toward an officer on foot.

"Hands up, get your hands up," said police after opening fire on the vehicle.

"I'm shot," one suspect can be heard saying after the gunfire.

"I know you're shot," the officer responded.

Both women are recovering.

James is being charged with felon in possession of a stun gun, reckless evading, burglary, identity theft and other related offenses.

Johnson is being charged with burglary, possession of stolen property, identity theft, shoplifting, among other charges.