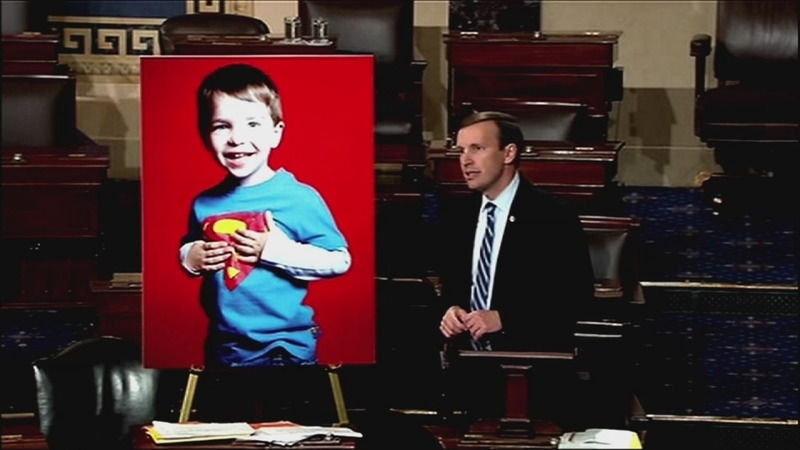 WASHINGTON (WPVI) -- A US Democratic senator who mourned the loss of 20 children in his home state of Connecticut four years ago waged a nearly 15-hour filibuster into the early hours of Thursday morning, demanding votes on gun control measures just days after a mass shooting at a Florida nightclub.

As compromise on the gun issue remained improbable, Senator Chris Murphy stood on the Senate floor for most of Wednesday and into Thursday, saying he would remain there "until we get some signal, some sign that we can come together."

He yielded the floor at 2:11 a.m., saying he had won commitments from Republican leaders that they would hold votes on amendments to expand background checks and ban gun sales to "suspected terrorists".

Sen. Pat Toomey (R-Pa.) has his own solution to tougher gun legislation.

Murphy spent much of the time speaking about the shooting at Newtown, Connecticut's Sandy Hook Elementary School in December 2012.

He finished the filibuster with a large picture of 6-year-old Dylan Hockley who was killed in the shooting.

The slaughter in Florida and an attention-grabbing filibuster in the Senate did little to break the election-year stalemate in Congress over guns Thursday, with both sides unwilling to budge and Republicans standing firm against any new legislation oppose

Senator Murphy spoke of Dylan's teacher finding the 6-year-old during the shooting.

"It takes courage to look into the eye of a shooter, and instead of running, wrapping your arms around a 6-year-old boy and accepting death as a trade for just a tiny little itty piece of increased peace of mind for a little boy under your charge. And so this has been a day of questions. And so I ask you all this question, 'If Anne Marie Murphy could do that, then ask yourself, what can you do to make sure Orlando or Sandy Hook never, ever happens again?' With deep gratitude to all those who have endured this very, very late night, I yield the floor."

Democrats have revived the gun debate after 49 people were killed at a nightclub in Orlando, Florida early on Sunday, the worst such incident in modern history.

The fight pits strong proponents of the Second Amendment right to bear arms against those arguing for greater restrictions on the ability to obtain weapons.