"It seems like just when it can't get worse it does," said the vice president of SEPTA's police union.
WPVI
By Annie McCormick 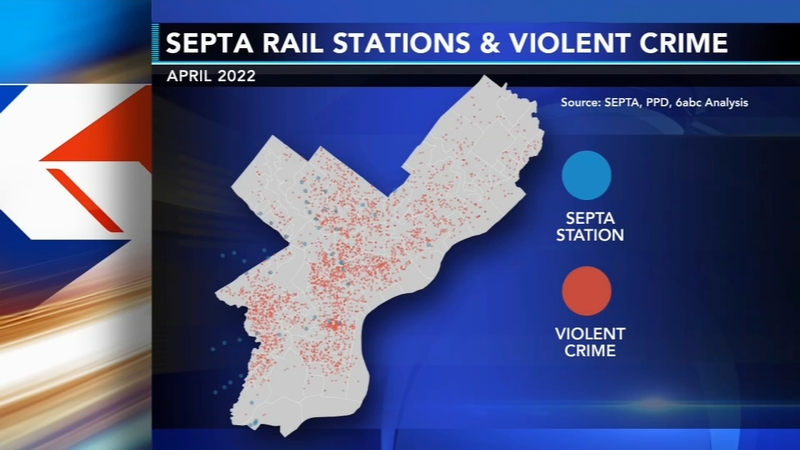 PHILADELPHIA (WPVI) -- The union for SEPTA's transit police has sent a third letter to the agency's board chairman and general manager about the need to hire more officers.

In the past five months, the union has reached out multiple times. In that time they have lost fifteen officers, all while seeing crime increase.

"The best way to address crime is to increase the police presence. That's where we are. We're so down in our numbers, that's why it seems the crimes are going up," said Troy Parham, the vice president of the Fraternal Order of Transit Police.

Parham has served as a SEPTA Transit officer for 23 years.

"I would ultimately like to see enough officers that when they are deployed there would be an officer in any given time. I want to see us stepping on each other. I want to see a constant flow of police officers," said Parham. "It seems like just when it can't get worse it does."

The FOTP says they are losing good officers and prospective officers to departments with better pay.

"We're losing quite a few officers to departments that are paying higher salaries. I think the salary has to be addressed immediately," said Parham.

"The safety and security of customers and employees is SEPTA's top priority, and we are actively recruiting for new Transit Police officers. SEPTA is also continually looking for ways to enhance efforts to attract new candidates, as well as retain our current officers. SEPTA looks forward to meeting with the FOTP next week to discuss options around how to make Transit Police compensation as competitive as possible in the current job market."
You can read the letter from the FOTP in its entirety below:

As I'm sure you are all well aware, this is the third letter in five (5) months we have submitted to this SEPTA Board, on behalf of the women and men of the SEPTA Transit Police Department whom we represent. For the entirety of these past five (5) months we have repeatedly requested to be granted an audience with SEPTA's General Manager Leslie Richards to discuss our ever-worsening transit police staffing crisis and the explosion of violent crime we are seeing on SEPTA's transit system. During this same period of time we have seen fifteen (15) more transit officers leave our ranks, leaving us woefully underprepared to face the current onslaught of violent criminal activity that is threatening to overrun our city's mass transit system.

In the past few days alone there have been three (3) separate incidents where SEPTA passengers have been stabbed in one of our stations. Multiple passengers have been pushed into the track area by an unknown assailant in just the past two weeks. It is the events of this past weekend, however, that should have every citizen of this city demanding action. A woman was reportedly raped at Girard BSL Station, on the very same day that a point of gun robbery occurred at 15th St Station, in addition to a man being stabbed at 34th St Station. A rape, a robbery, and a stabbing all occurring in one day on SEPTA.

This is absolutely infuriating and unacceptable. However, it is not at all surprising when considering the startling lack of visible police presence on SEPTA's transit system. This Union is well aware of the hiring and recruitment challenges being experienced by our transit police department.We are also confident that this is a simple issue with an obvious solution. SEPTA absolutely must do more to attract quality candidates to join our ranks, and most importantly, this SEPTA Board must take decisive action to retain the officers that we currently have. It has been said by representatives of our department that this is not a SEPTA problem, it's an issue of not enough people wanting to be police officers. Yet in the past five (5) years we have lost over 100 transit officers to resignations; almost all of whom have left to take positions at police departments offering higher salaries, better benefit packages, and more quality working conditions. The harsh reality is that no one wants to be a SEPTA police officer. Again, this is an unsurprising result when you consider the example of a New Jersey Transit Police Officer making 15K more than our officers to do a similar job. It is for this reason that hundreds of applicants stood in lines several blocks long this past weekend to take the NJTPD written examination, while it's not uncommon for just a handful of candidates to show up for our testing processes. This status quo is simply not sustainable.

At this point, it is fair to ask whether it is more important that SEPTA maintain its archaic tradition of patterning its Transit Police salaries to match the salaries of its non-police employees or that they take immediate and necessary action in order to protect its passengers and its employees. We believe the answer to that question is painfully obvious. As such, the Fraternal Order of Transit Police, on behalf of all of SEPTA's Transit Police Officers, is again demanding that immediate action be taken to restore our transit police department's staffing levels to the budgeted number of 260, in the interest of public safety and for the safety of our brave transit officers.