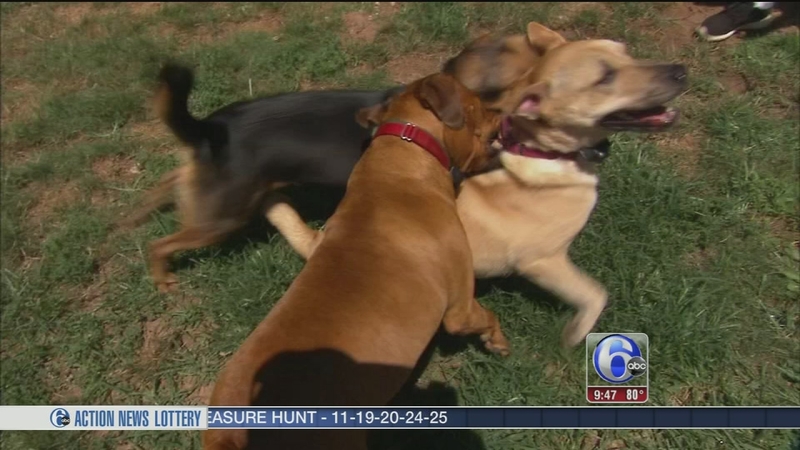 BLUE BELL, Pa. -- One family found that one dog wasn't enough, and adopted a total of three rescue dogs within a year.

"Dogs are like potato chips, you can't have just one," said Denise.

Anthony and Denise Giovinazzo started their pack when they adopted Gotti in April of 2015.

"I saw him and I saw his face, and I just fell in love with him," said Denise.

Followed by Gotti's sister, Queenie, who was supposed to be just a temporary foster.

"Queenie is a little insecure. She has her moments but she's much much better than when we got her, being with the other two dogs she's learning from them," said Denise.

With Gotti as the alpha, they make three of a kind.

Denise says, "They love each other."

Antony adds, "It gives a good stress relief. If you're having a bad day, you know, all of the sudden one of them comes up and crawls in."

Gotti, Boone, and Queenie were all adopted from Hemlock Edge, a foster based rescue, in Blue Bell.

"The whole point of having a foster home based rescue is to be able to socialize, train, rehab the dogs into being in a normal household environment," said Chris Tornetta, founder of Hemlock Edge Rescue.

Chris said, "She is completely crate trained, she's housebroken. She's learning manners, and still learning more commands. She's great with children, great with cats, great with kids, she can mold to any lifestyle, any home."

"She's on her way to being trained to being house broken. She's still a puppy. That total mutt package. Your funny lab, smart lab, and the silly hound," said Chris.

And this is Sippi Cups. She is a one-and-half-year-old Pitt mix, and a sweetheart. She is a wonderful dog looking for a forever home with lots of love. She would prefer to be in a home where she could be the only pet, but loves to play with other dogs.

If you're interested in Sippi Cups or any of the animals you've met today you can visit the Hemlock Edge Rescue website.