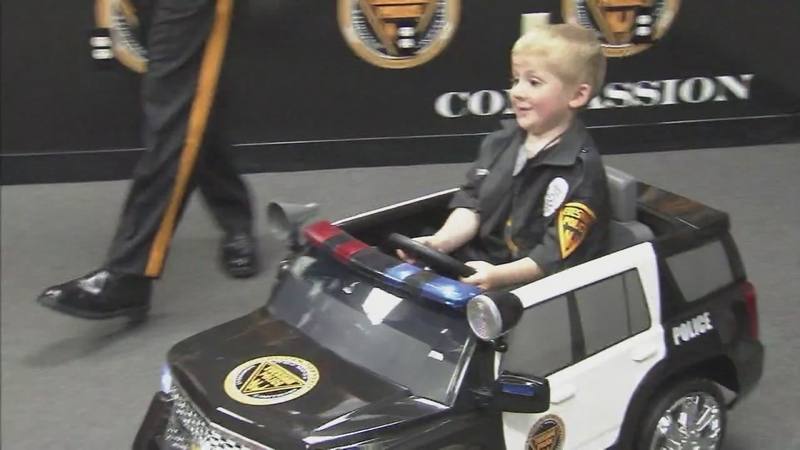 EVESHAM, N.J. (WPVI) -- Little boys have big dreams and Chase Gilchrist's dream is to be a cop.

The 4-year-old, who's been battling a rare brain cancer, saw that dream come true when he was sworn in by Chief Chris Crew as an honorary member of the Evesham Police Department.

Though Thursday as only his first day on the job, Chase was already he's complaining about the uniform.

Chase's visit started out with a ride to headquarters in a real police car. He got his own uniform shirt and ID and was given a black and white electric cruiser with lights and sirens donated by Walmart.

"So now that he's got the official shirt on and the official police car, he's going to go nuts. He's loving it," Chase's father Scott said.

"To see him put that uniform on and he looked at that patch and looked at his name on it and the police car, it was just awesome. This is what it's all about," Evesham Police Lt. Joseph Friel said.

"This is my best, best day here and the airport show was my second best day," Chase explained.

This all came about when the Gilchrist family asked a friend in the police department if there was any chance for Chase to visit. Well, it turned into a lot more than that.

"I was thinking a quick little tour of the police station, but this went above and beyond," Chase's mother Nicole Gilchrist said.

In addition to touring the police station and riding on a special police ATV, Chase and his brothers Austin and Blake got an up-close look at a police canine demonstration.

He is currently in remission, but because of the type of cancer he has, Chase's life expectancy is limited.

"To be able to give somebody their dream is an amazing feeling. Many little kids want to be a police officers. This one truly has it in his heart," Evesham Police Lt. Ron Ritter said.

And Chase even used his police radio.