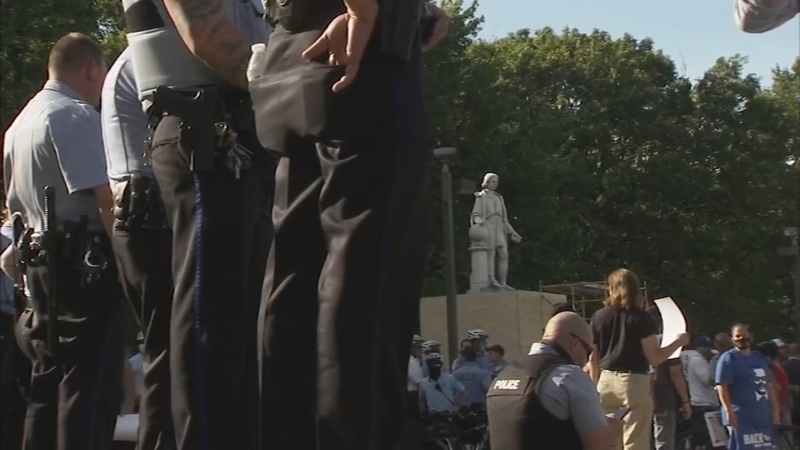 SOUTH PHILADELPHIA (WPVI) -- Hours after the city put a plywood barrier around the Christoper Columbus statue at Marconi Plaza in South Philadelphia, an evening gathering there became a pro-police rally.

A number of residents were there to show support for 1st District Commander Lou Campione.

"It's nice to see," said Steven Weiler of the FOP. "We need backing now. We know that a large part of this community wants police... bottom line."

Hours after the city put a plywood barrier around the Christoper Columbus statue, an evening gathering there became a pro-police rally.

The Fraternal Order of Police says Campione was reassigned following a conflict between a journalist with Unicorn Riot, a self-described non-profit left-wing collective. Campione told the journalist they were inciting a riot while recording citizens, some armed, protecting the Christopher Columbus statue.

Tuesday began with crews erecting plywood to protect the statue after the city announced they would not remove it.

Crews arrived Tuesday morning to build a protective structure around the Christopher Columbus statue in Marconi Plaza in South Philadelphia.

On Monday Mayor Jim Kenney announced plans to initiate a public process to consider the future of the statue on South Broad Street.

Over the weekend, citizens - some armed - began a vigil to guard the statue.

Mayor Jim Kenney announced plans to initiate a public process to consider the future of the Christopher Columbus statue.

Center City attorney George Bochetto says, on behalf of the "Friends of Marconi Plaza," he filed an emergency injunction to keep the statue in place after receiving a tip it would be removed overnight Sunday.

"We stopped them dead in their tracks. If not for that, the statue would be gone," Bochetto said.

Andrew Richman, Chief of Staff in the City Solicitor's Office, denies that any injunctions were granted by a judge against the city and the mayor never had plans to remove the statue.

"No injunctions or court orders have issued against the city. Mr. Bochetto filed an emergency TRO (temporary restraining order) on Sunday night based on a rumor about the statue's removal that someone in the plaza heard. The emergency judge declined to grant that injunction after the city dispelled the rumor on the record. The mayor never ordered the statue to be removed early Monday or any other time. Knowing that the mayor had no plans to remove the statue, Mr. Bochetto still filed another injunction Monday morning anyway before a second judge. The city emphasized throughout the Monday hearing that the mayor was issuing a statement later that day announcing that the statue's removal would go through the Art Commission Process and that much of the case was moot," Richman said.

Bochetto said he does not believe this will fall under the jurisdiction of the art commission.

"I believe the historic commission is now going to have jurisdiction over this and there could be federal regulatory oversight that has to be obtained before anything can be done to that statue because it's historically designated," Bochetto said.

Some residents claim the statue is an important part of Italian-American heritage and should be left alone.

Others were denouncing Columbus, calling him a symbol of hate and oppression.

Statues of Columbus have been removed in other cities, including Camden, New Jersey and Wilmington, Delaware.

Columbus statues in Camden, New Jersey and Wilmington, Delaware have been taken down.