"SMA use to be one of the worst diagnoses in clinic, but now... there's so much that can be done," one doctor said.
WPVI
By Ashley Johnson 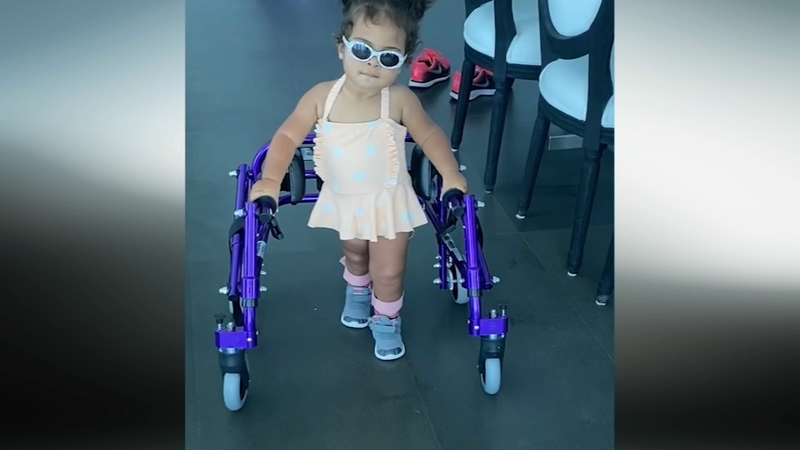 PHILADELPHIA (WPVI) -- Amber-Joi Watkins is raising awareness about spinal muscular atrophy, a genetic disease that causes muscle weakness and respiratory failure. It's the leading genetic cause of death in infants, and doctors said it affects every one out of 10,000 babies.

Watkins' daughter, Céline Domalsk, continues to defy the odds and is literally a walking miracle. Her mother said that at four months old, Celine wasn't progressing as fast as other babies. But she said she was reassured everything was OK.

"I was told babies develop differently, and that she's perfect," Watkins said, "So, I held on to that instead of trusting my gut."

Her gut instinct was right. Doctors at Children's Hospital of Philadelphia diagnosed Céline with spinal muscular atrophy, SMA type 1. It's the most severe, in which children often can't ever crawl, sit on their own or feed themselves.

"One of the initial things they said was she's probably never going to be an athlete. She might not ever walk," Watkins said.

"Before treatments, it was expected children would either die or need full-time mental auditory support, like a breathing tube," Kichula said.

Kichula immediately started Céline with rigorous physical therapy and found special permission to put the toddler on a drug that is now FDA approved.

"SMA use to be one of the worst diagnoses in the clinic, but now we're almost happy to diagnosis it because there's so much that can be done," Kichula said.