76ers get Tobias Harris from Clippers in 6-player deal 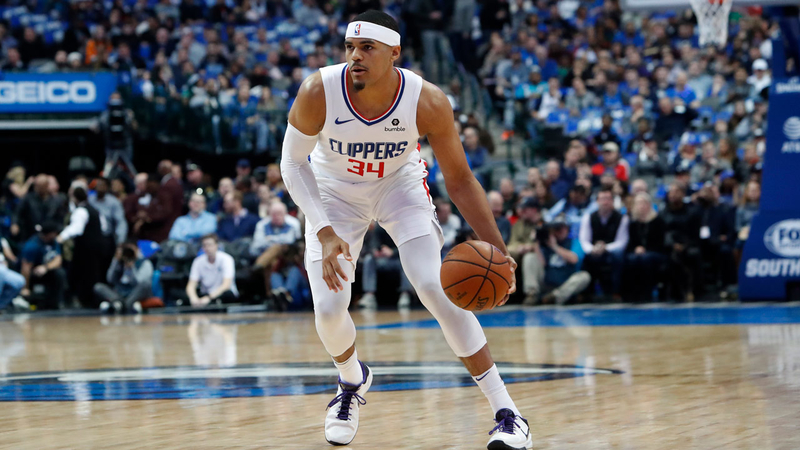 Tobias Harris drove the lane, tossed up a runner and buried the winner in what turned out to be his final shot for the Los Angeles Clippers.

His packed bags needed a new destination. Next stop, Philadelphia.

The 26-year-old Harris is headed to the 76ers as part of a late-night deal that suddenly gives the team the best starting five in the Eastern Conference and stamped them as legitimate title contenders.

"We are in the unique position to contend now and we think this trade positions us well for the postseason," 76ers General Manager Elton Brand said in the news release formally announcing the deal.. "Tobias is one of the best three-point shooters in the NBA and possesses an innate ability to impact the game on both ends of the floor."

Harris is ready for the move - he tweeted early Wednesday a GIF from the opening credits of the 1990s sitcom "The Fresh Prince of Bel-Air" showing Will Smith's character playing basketball.

The Sixers can only hope this trade turns into a story all about how the East got flipped-turned upside down.

The Sixers also acquired center Boban Marjanovic and forward Mike Scott as part of the deal.

Harris, playing for his fifth NBA team, is having a breakout season with the Clippers. He averages 20.9 points and shoots nearly 50 percent from 3-point range and is expected to start with All-Stars Joel Embiid and Ben Simmons, along with Jimmy Butler and JJ Redick, to form the best starting lineup this side of Golden State.

RELATED: How the Tobias Harris trade shakes up the NBA

The Sixers suffered in the early years of "The Process" but are clearly in a win-now mode. Harris and Butler both will be free agents this summer and both could command a maximum-level contract.

The Sixers, who were eliminated in the second round of the playoffs last season, are 34-20 and in fifth place in the Eastern Conference.

The Clippers are 30-25 and have shed the salary needed to make them attractive for major free agents in the summer. They held the eighth seed in the West, but the trade seems to signal an intent on worrying little about this season and building through free agency and the draft.

This could be the first of several major deals expected before the NBA trade deadline passes at 3 p.m. Eastern Thursday. Anthony Davis wants out of New Orleans, Memphis is shopping Mike Conley and longtime teammate Marc Gasol, and Toronto's Kyle Lowry is on the market.

Will East contenders Boston, Milwaukee and Toronto be just as aggressive at the deadline as the Sixers?

Butler might be in the mix with the right offer and the Sixers are certainly listening to offers for any trade that involves 2017 No. 1 draft pick Markelle Fultz. Fultz has been rehabbing a bad shoulder and missed most of the season. Coach Brett Brown refused to commit before Tuesday's loss to Toronto that Fultz would be part of the playoff rotation.

"I'm hoping to be pleasantly surprised with how he arrives back with us more than assume that he's going to be there," Brown said. "It's not smart for me to think like (he'll be a part of the rotation)."

Brand is going for it in his first season as GM, and the Sixers suddenly seem positioned as a legitimate title contender. Brand made the Butler and Harris trades without surrendering 2018 first-round pick Zhaire Smith.

Harris, still not quite healed from a shoulder strain he suffered last week, made his final game with the Clippers a memorable one. He hit a running jumper in the lane with 4.3 seconds remaining to lead the Clippers past the Charlotte Hornets 117-115 on Tuesday night. Harris finished with 34 points.

"It's as good as it's going to be," Harris said of his injured shoulder. "It's not any better or worse. It's about pushing myself and battling through it, keeping my mental state at a high level to go into a game and be effective."

The 76ers play again Friday against Denver - and a retooled team can truly start its run toward a title.