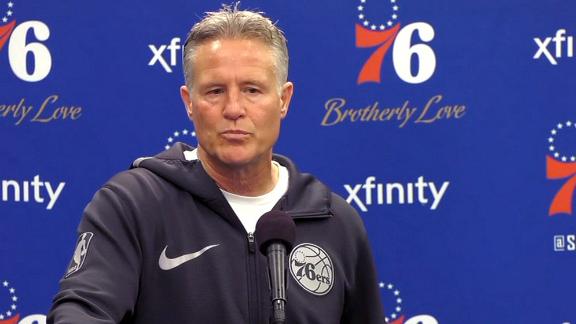 Jahlil Okaforgot his wish on Thursday when the Philadelphia 76ers finally traded the beleaguered No. 3 overall pick of the 2015 draft to the Brooklyn Nets in exchange for forward Trevor Booker.

The deal ends the stalemate that had kept Okafor on the bench for all but two games this season.

Once a prized piece of The Process, Okafor rapidly fell out of favor with the rise of star center Joel Embiid.

"Love you. New beginnings,'' Embiid said he texted Okafor. "Good luck. And I made sure to let him know I was going to kick his ass.''

Team president Bryan Colangelo said he reached a deal with a team he declined to name to trade Okafor last season until it fell apart at the last minute. That led to an awkward situation where Okafor didn't even travel with the team during the trade deadline. Okafor led the Sixers in scoring as a rookie with Embiid out with injuries. Okafor played 55 games last season and never really meshed with the franchise center. Okafor started piling up DNP-CDs and those stretched into this season, where the Sixers will chase a playoff berth without him.

"There is a level of toughness and versatility that interests me,'' Brown said. "He's shown that he can play, handle not [playing] and be good people and handle himself like a pro.''

Philadelphia had excised Okafor from its rotation after declining its team option on him for next season, and Okafor's representatives asked for a trade or a buyout.

Okafor made the first-team All-NBA Rookie team, but that disappeared into the distance as he not only dropped behind Embiid on the depth chart, but this year was demoted behind Richaun Holmes and Amir Johnson. The Sixers are undergoing a franchise renaissance, armed with young superstars Embiidand Ben Simmons. Okafor, meanwhile, had been cast aside, a casualty of a process that has moved on without him.

Colangelo had no ties to Okafor and there was no secret of his desire to move him. Okafor played in 105 games (81 starts) with the Sixers and averaged 14.6 points, 5.9 rebounds, 1.2 assists and 26.2 minutes while shooting 51.0 percent from the field.

"I wouldn't say there's regrets. I'd say there's human disappointment,'' Brown said. "We went through a lot together while he was here.''

Embiid said he was "excited" and "really happy for Jahlil" to be getting a fresh start, but made it clear he is not going to go easy on him whenever they face each other.

"I dunno, we play them four times a year, so I made sure to let him know that every year, four times, I'm gonna kick his ass," Embiid said.

The Nets also requested waivers on guard Sean Kilpatrick.Atkinson said he was ready to help the two former first-rounders find success with the rebuilding Nets.

"This trade provides us with a good opportunity to bring in two young players who were high picks in recent drafts and give them a chance to succeed in our system,'' Nets general manager Sean Marks said in a statement.

Booker, a seven-year veteran out ofClemson, tweeted his thanks to Brooklyn and its fans on Thursday before the deal was announced.

Stauskas, who joined the Sixers in 2015 in a trade from Sacramento, is averaging less than 1 point per game. He has played in only six of Philadelphia's 23 games this season.

The Sixers lost to the Los Angeles Lakers107-104 on Thursday night, and the Nets beat theOklahoma City Thunder100-95 in Mexico City.