A Wentz, a win with no wince: The scramble that shows Wentz's back 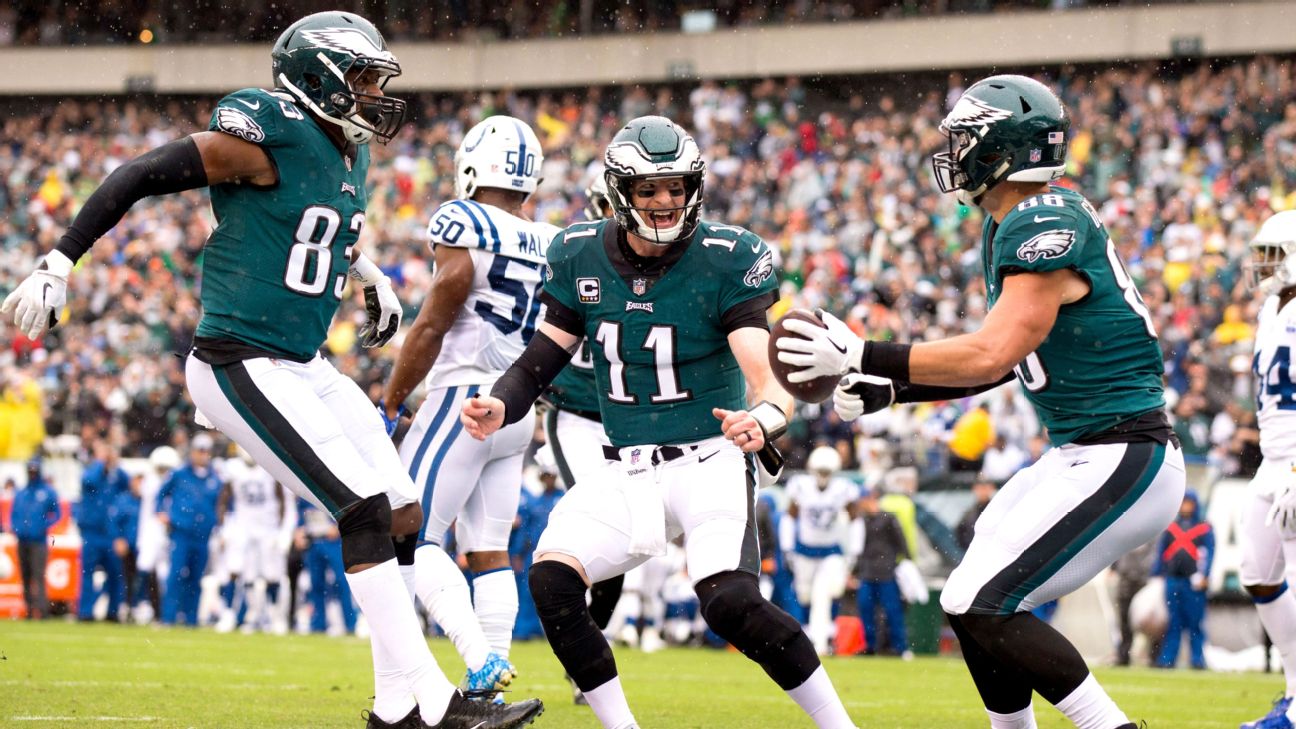 PHILADELPHIA -- Carson Wentz plays daredevil football, the repaired ligaments in his left knee be damned, and so it was no surprise that he honored his return to pro football Sunday with a schoolyard dive that was worth far more than six second-quarter yards and what would prove to be an irrelevant first down.

A franchise quarterback needs great desire to complement his great talent, and there is no question Wentz comes packaged with ample supplies of both. So inside the final minute of the first half, from his own 32-yard line, Wentz spun away from two hard-rushing defenders, veered left and leaned on his speed and athleticism as two-thirds of the Indianapolis Colts' roster gave chase.

Wentz did not see an opportunity to save his recovering body for another rainy day. He saw only the marker near the Philadelphia Eagles' sideline, and he took off headfirst -- Superman style -- as he went flying out of bounds.

The Eagles did nothing more with a possession that played no statistical role in their 20-16 victory over the Colts, and yet that singular play illustrated why they might win this season's Super Bowl with Wentz like they won last season's Super Bowl with Nick Foles. The kid wants to be great. As much as his attack-mode style of play got him hurt against the Rams last December, and as much as that style might get him hurt again, Wentz has the requisite character traits of a champion. Players want to play for him.

"I thought it was just a normal scramble to me," Wentz would say. "Obviously, made a guy miss in the pocket and saw the first-down marker and dove for it. Pretty standard for me."

At the time he was speaking, Wentz was wearing an outfit that wasn't pretty standard for anyone. His was wearing a neon-green jacket against a white shirt and pale skin that would've made him look a bit leprechaun-ish, if not for his 6-foot-5 frame. The quarterback called the sensation of getting hit for the first time in more than nine months, and then popping back up again, "like riding a bike." Wentz said the first time he got rocked by an opponent "felt great."

Two games ago, it was written here that Philly should ride Foles until it was clear the magic was going, going, gone ... until he lost two out of three, or something along those lines, before handing the ball to the more gifted player. But as they proved against the Patriots in February, the Eagles don't mess around. As soon as Wentz's knee was good to go, they escorted Foles back to the bench and told the second overall pick in the 2016 draft to let it rip.

"You have to take the leash off him," running back Corey Clement said. "That guy -- he's always wired to do something great."

No, Wentz was not great after he trotted toward the huddle, with 12:21 left in the first quarter, to a standing ovation. He took five sacks, missed a few open receivers and handed the Colts a pair of third-quarter field goals on a dreadful interception and a fumble.

But given the circumstances, this was a hell of a debut. Wentz completed 25 of 37 passes for 255 yards. He opened the game with a no-huddle, quick-tempo drive of 12 plays and 79 yards punctuated by a 13-yard touchdown pass to Dallas Goedert on a play, Goedert said, his quarterback changed at the line. Wentz closed the game with a monster 17-play, 75-yard drive that featured the quarterback's great third-and-9 escape and throw to Nelson Agholor for the first down.

"Just kind of getting back to his old self," Eagles coach Doug Pederson said of his guy.

On the losing side of Lincoln Financial Field, Colts coach Frank Reich -- last year's offensive coordinator in Philly -- had to answer tougher questions about his own returning superstar, Andrew Luck, and why Luck's backup, Jacoby Brissett, was called on to throw a Hail Mary on the final, futile play. "He can throw it a mile," Reich explained. And his starter, apparently, cannot.

Luck wrecked his shoulder, missed all of 2017, and won't be the same pre-injury player for some time. How long will Wentz need to return to his own pre-injury form?

He looked a half-step slower on his scrambles Sunday, though he remained more elusive than your average starting quarterback -- more elusive and more willing to put his body in harm's way. "We need that from a quarterback," tight end Zach Ertz said of his teammate's dive in the second quarter.

"That's just him," Pederson said. "That's the aggressive nature that he plays with. Those are types of plays that you just make, you just do. It's just instinct. It's something you don't coach. It was a great, great play, a great way to get a first down and keep us on the field."

When it was all over, when he'd secured his first NFL victory in forever, Wentz wore only a wraparound towel as he stood at his corner locker and checked his phone -- perhaps for a congratulatory message or three. It has been a long, long time. Wentz had to watch his team win an epic Super Bowl without him, and now he needs a ring and a parade to call his own.

"I don't want to put restraints on him at all and put him in bubble wrap," Pederson said. "That's not how we play the game. That's not how he plays the game."

Wentz reminded everyone of that fact near the end of the first half when he risked his body for a first down he positively had to have. The returning quarterback had made his statement. Whether or not he replicates Foles' feat, Wentz will travel this path one way: headfirst.

Wentz throws TD, INT in return to action
In his first game of the season, Carson Wentz throws for 255 yards and a touchdown but also is picked off in the Eagles' win over the Colts.

Wentz says he had no limitations with left knee
Carson Wentz tells Sal Paolantonio about the excitement he felt leading up to his return and provides an update on his left knee.

Pederson glad to see Wentz back to his 'old self'
Doug Pederson evaluates Carson Wentz's first game back this season and says that overall his performance was "not too bad."