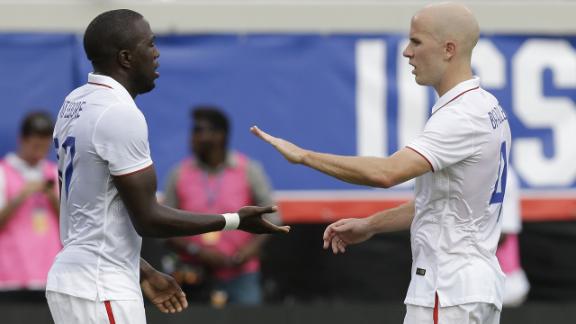 JACKSONVILLE, Fla. -- Jozy Altidore insists his six-month scoreless streak never bothered him. No sleepless nights. No feelings of frustration. Not even a bit of worry it would stretch into the World Cup.

His coach believes otherwise. Whatever the case, Altidore and the United States won't have to deal with that story line in Brazil.

- Carlisle: Grading the U.S. players vs. Nigeria
- Video: Lalas and Keller break down the win
- Altidore: We responded very well

Altidore scored a pair of goals to lead the United States over Nigeria 2-1 Saturday night in the Americans' World Cup send-off match.

Altidore tapped in Fabian Johnson's cross in the 31st minute on a play that started with an Alejandro Bedoya run, stopping a 27-match scoreless streak for club and country with his first goal since Dec. 4 for Sunderland against Chelsea.

"To be honest, it makes no difference," Altidore said. "I don't know if it's weird to you, but it's not weird to me. I've played for this team for such a long time that I think it's my responsibility to kind of help the team in other ways, tracking back and just being somebody now that the other guys can look up to. And I take that very serious."

He doubled the lead in the 68th minute, running onto Michael Bradley's looping 30-yard pass over the defense. Altidore took a touch with each foot as he cut inside of Nigeria captain Joseph Yobo, then beat goalkeeper Vincent Enyeama to the near post with a right-footed shot from 12 yards for his 23rd international goal.

"The second goal was world class, no doubt about it," U.S. coach Jurgen Klinsmann said. "You heard the other coaches of the last friendlies, especially the Turkish coach who said, 'This (guy) is a handful.' Hopefully we can keep him as a handful going down to Brazil now."

Klinsmann stopped short of calling Altidore's performance a much-needed boost but said it was "a wonderful message" and gave the player "a big smile at the right time now."

"I think it will give him a lot of confidence," Klinsmann said. "It's always a tough period when you don't score for a striker. And everybody around you let's you know that. You get more and more anxious about the situation. ... You work harder and harder, which he did the last three-and-a-half weeks in camp. ... And then you just wish, you know, that the moment comes and you put it in there and you go start to be your old self again.

"But you've got to go through that working process. That's what I always told him, 'You're not getting it for free. You've got to go and work for it.' He got sharper and sharper, fitter and fitter. We knew that if he gets the chances, he will put one in."

The U.S. was undefeated in its send-off series for the first time since it started in 2002, beating the African champions following a 2-0 victory over Azerbaijan and a 2-1 win over Turkey.

Making their seventh straight World Cup appearance, the Americans head to Brazil on Sunday night and open June 16 against Ghana, the team that eliminated them from the last two tournaments. They follow with games against fourth-ranked Portugal and second-ranked Germany.

Tim Howard made his 100th international appearance, becoming the 15th American male to reach the century mark and tying Tony Meola for second-most appearances by an U.S. goalkeeper, two behind Kasey Keller.

Victor Moses converted an 86th-minute penalty for Nigeria after he was knocked over in the penalty area by Matt Besler.

A crowd of 52,033 watched a friendly that began with an 84-degree temperature and 65 percent humidity that should be similar to the climate in Brazil.

Altidore's confidence had been a subject of debate since the team started training at Stanford, California, in mid-May. A year he scored 31 goals for AZ Alkmaar in the Netherlands and set a season record for an American with a European club, he scored just twice for Sunderland.

It was his first multigoal game since a hat trick in a friendly against Bosnia-Herzegovina last August, part of an American record five-game scoring streak that ended a 19-month stretch with an international goal. June 7 has become a favorite date for the 24-year-old: He scored on that date at Jamaica in a World Cup qualifier last year and against Canada in a friendly in 2011.

"He's our horse. We've made no bones about that. It's no secret," Howard said. "We have to ride him. He has to put us on his back and score some goals for us. He's shown he can score goals in bunches for us. Jozy is just fantastic. He just shows how he can turn it on. "

Klinsmann inserted midfielder Kyle Beckerman into the starting lineup alongside Jermaine Jones for the first time since the clinching September qualifier against Mexico. Initially a 4-2-3-1 formation, it shifted as Beckerman remained at the base of a midfield diamond at times, with Jones pushing wide left alongside Bradley in the center and Clint Dempsey on the right.

Bedoya, who started last month's 2-0 win over Azerbaijan and was replaced by Brad Davis for last weekend's 2-1 victory over Turkey, was back in the lineup. Graham Zusi joined Davis on the bench.