Before he can play, Markelle Fultz will have to tell Sixers he's ready 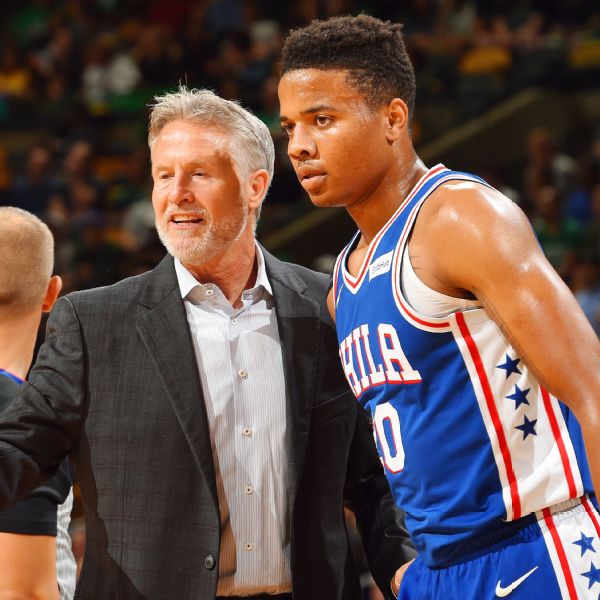 PHILADELPHIA -- The 76ers want Markelle Fultz back this season, but only when the No. 1 pick in last year's draft is comfortable that he has regained his shooting stroke.

Coach Brett Brown said before Saturday night's game against Minnesota that it would take Fultz telling the team's he's ready to play before a decision is made on his status for the rest of the regular season and playoffs.

"There's no clandestine conspiracy theory motive," Brown said. "You know what I know. It's fluid."

Fultz played four games in October and shot 9-of-27 from the field and didn't attempt a 3-pointer. The Sixers then shut down the 19-year-old with what they called "soreness and scapular muscle imbalance in his right shoulder."

Fultz has long since returned to practice but is still working on his shooting form. Video from workouts in January showed Fultz awkwardly pushing the ball from his chest. It appears that his stroke has improved, but he missed his 68th consecutive game Saturday.

"I think he is quite close," Brown said of Fultz, who has declined to speak to reporters. "I think if we'd all watch the video, we'd all probably agree with that."

The Sixers traded with Boston to move up to the No. 1 spot in the draft last June to take the University of Washington star in hopes that he would be the missing piece on a promising team that includes young stars Joel Embiid and Ben Simmons.

Fultz's scoring off the dribble and creating his own shot haven't materialized. Still, the Sixers were closing in on their first playoff berth in six years and aren't giving up hope on their 6-foot-4 guard, even though there are only 10 games left in the regular season after Saturday.

"It's just something that when Markelle Fultz feels like he can go -- he really feels good about himself and his health, the shoulder, everything and the medical people support that -- he knows that he has a coaching staff and a team that will welcome him in when he says go," Brown said. "He also understands the season is around the corner in terms of the end of the regular season. That's where it's at."
Report a correction or typo
Related topics:
sportsespnmarkelle fultzphiladelphia 76ersshouldernbabrett brown
Copyright © 2022 ESPN Internet Ventures. All rights reserved.
TOP STORIES
Building owner charged in fire that led to firefighter's death
Witness: Trump grabbed steering wheel, demanded to go to Capitol
Carry permits expected to skyrocket in NJ after SCOTUS ruling
Neighbors tired of pickleball noise: 'It's as loud as a rock concert'
Epstein associate Ghislaine Maxwell sentenced to 20 years in prison
Off-duty corrections officer robbed, carjacked in Philadelphia
SCOTUS abortion decision: Women of color will likely be most impacted
Show More
Bryce Harper set for thumb surgery, Phils hope he plays this year
Injuries reported after crash involving Philly police vehicle
Black bear dies after getting stuck inside hot car in Tennessee
$6 billion will be infused into Navy Yard to make it a 'destination'
Grandmother of Uvalde school shooter released from hospital
More TOP STORIES News