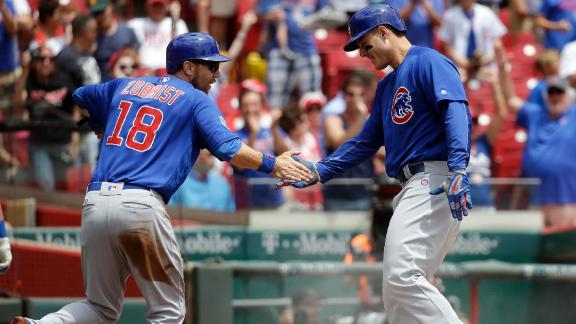 CINCINNATI -- Reds center fielder Billy Hamilton was placed in the concussion protocol program after getting hit by a fly ball that deflected off left fielder Adam Duvall's glove during Wednesday's game against the Chicago Cubs.

The hit, which came off the bat of Cubs first baseman Anthony Rizzo, resulted in a three-run, inside-the-park home run.

Hamilton and Duvallwere converging on Rizzo's line drive to left center field in the first inning when the ball deflected off Duvall's glove, hitting Hamilton in the face.

Hamilton was on the ground as the ball rolled to the wall in left field. Rizzo circled the bases for an inside-the-park home run, the first of his career.

"We both called for it at the same time," Duvall said. "I thought we were going to collide. I didn't take my eye off the ball, but I might've flinched a little bit. It hit him pretty good. It ended up rolling pretty far."

Rizzo said he couldn't remember the last time he circled the bases that way.

"Maybe Little League?" he said. "Nothing like that. I'll take it."

It was the Cubs' first inside-the-park homer since 2011, when Tony Campana circled the bases, also against Cincinnati.

Earlier this month, Hamilton was on the seven-day disabled list because of a concussion he suffered sliding into third base.

Reporters could see a noticeable knot on the side of Hamilton's head Wednesday after the game, but he did not speak to the media.

The Cubs beat the Reds 9-2 on Wednesday to complete a three-game sweep.