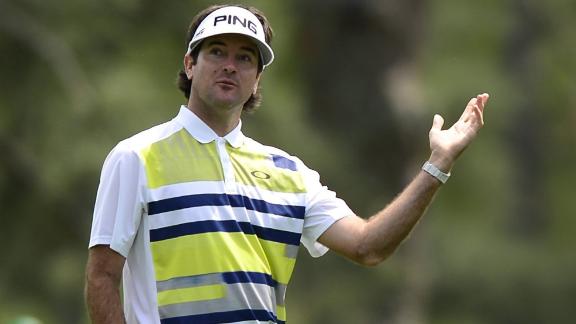 AUGUSTA, Ga. -- Bubba Watson took the high road Tuesday about the ESPN.com PGA Tour Secret Survey that listed him first in an anonymous poll of tour players who were asked which peer they would be least likely to help if in a fight.


Watson, the defending Masters champion, got 22 votes out of 103 players surveyed on a variety of questions. The next most was Patrick Reed with 11.

"Here is the way I take it: I take it as I need to improve as a man," Watson said during a news conference at Augusta National. "I take it with pride. I need to get better. And I think over my career, since my rookie season to now, I've gotten better.


"But obviously there's more room for me to improve as a man. And so hopefully next year or the year after, it improves. It's a challenge. It's great. I'm glad that it came out and it's going to help me improve.


"So if it's a bad thing and people don't like me, then I've got to improve and prove them wrong."


Watson said he answered the survey.


"I answered that question, I put my name on there, because I'm not going to call out anybody; there's nobody I dislike on tour," he said. "I dislike them if they beat me, but I don't dislike them as a person. So I put my name down there. So one of those names were me; I wrote it down myself."

As for the question itself ("_____ is in a parking lot fight. You don't stop to help him") Watson said, "I've never been in a fight in my life, so if I was in a fight, it was my fault. I caused somebody to get angry. So yeah, I wouldn't help myself, either."


"I've had some mess-ups on tour, and I think I've improved in those areas and I'm trying to get better. That's all I can do. I'm glad people that call me out when they do, that's the only way I can get better. If I don't know about it, then I can't improve."


"I didn't see the poll, but too bad for him," Fowler said. "He's one of my best friends out here. He's awesome. We have a lot of fun together."


Fowler said he didn't think the survey results would be a lingering issue for Watson.


"I don't think he's really in a position where he's not too worried if certain guys like him or don't like him," Fowler said. "I feel like if you're worrying about something like that, it's only going to weigh on you. You've got to take care of your family and take care of your golf game. Those are the priorities."