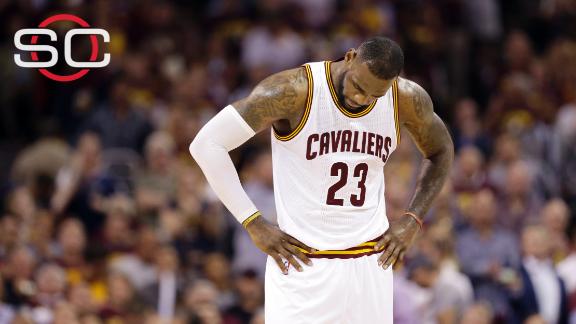 Cheer up, Cleveland -- the Cavaliers are the clear-cut favorites to win next year's championship.

The Golden State Warriors outlasted the depleted Cavaliers on Tuesday, clinching this year's championship with a 105-97 win in Game 6 of the NBA Finals.

But the Westgate Las Vegas SuperBook made Cleveland the early 9-4 favorite to win the 2016 NBA title. Golden State and the Oklahoma City Thunder are next at 5-1, followed by the Los Angeles Clippers (10-1), San Antonio Spurs (12-1) and Chicago Bulls (12-1). A lot could change during the offseason, with a plethora of big-name free agents possibly on the move.

The favored Cavaliers also could see significant adjustments.LeBron Jamesis a free agent but not expected to move. Forward Kevin Love has said he plans to be back with Cleveland next season.

The Cavs also look forward to the return of point guard Kyrie Irving, who missed parts of the playoffs before fracturing his kneecap in Game 1 of the Finals.

"Look at what they're doing without Love and Irving," Jeff Sherman, assistant manager and NBA oddsmaker at the SuperBook, told ESPN Chalk. "We've seen with the Heat, where the first year LeBron didn't win. Usually, things improve, chemistry improves. We just expect that they'll be that much better next year and actually have some separation between other teams, assuming that they're healthy."

The Los Angeles Lakers and New York Knicks both opened at 80-1 but aren't the largest long shots on the board.

That distinction belongs to the Minnesota Timberwolves, Charlotte Hornets, Philadelphia 76ers and Orlando Magic, who are all listed at 200-1.