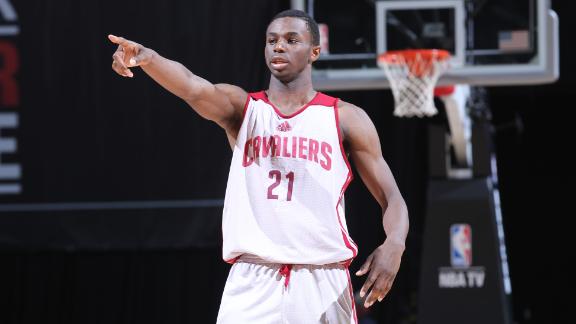 The Cleveland Cavaliers officially signed No. 1 overall pick Andrew Wiggins to a contract on Thursday, meaning he cannot be traded until at least Aug. 23.

Wiggins has been involved in trade discussions between the Cavs and Minnesota Timberwolves as part of a deal that would send Kevin Love to Cleveland. Because of league rules on rookie contracts, such a deal now cannot be completed for 30 days. Wiggins, who signed a four-year deal, will have a starting salary of $5.5 million after the Cavs gave him the allowed 20 percent premium on the rookie scale, sources said.

Sources close to the situation told ESPN.com's Marc Stein that the Wolves' preference, based on the offers made for Love to date, is completing a trade with Cleveland centered on Wiggins. But the 30-day window leaves open the possibility that another team could step in with an offer to trump Cleveland's best pitch.

As ESPN.com reported earlier this week, Chicago is making a renewed trade pitch for Love -- with forward Taj Gibson and newly signed Nikola Mirotic believed to be at the heart of the Bulls' offer -- while Golden State also could re-emerge as the biggest threat to Cleveland if the Warriors relent on their long-standing reluctance to include Klay Thompson in their offers for Love.

As things stand, sources say, Minnesota likes the idea of acquiring Wiggins better than anything else that has been offered thus far because Wiggins is believed to have superstar potential. The Cavs nonetheless face a nervous 30-day wait until Wiggins is eligible to be moved.

Also on Thursday, the Cavs signed second-round pick Joe Harris to a three-year deal worth $2.7 million with the third season being non-guaranteed, sources said.