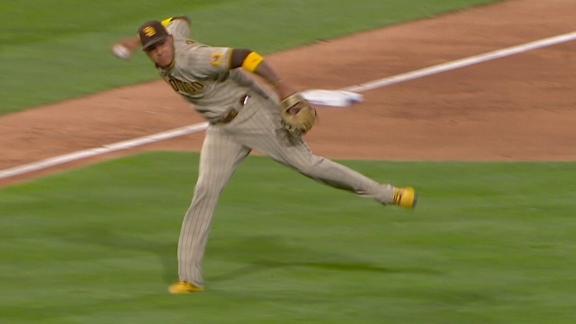 PHILADELPHIA -- - Mike Clevinger's first major milestone after a year off from elbow surgery was simply getting back to the big leagues. Next was to pitch without restrictions and become a trusted member of San Diego's rotation.

Clevinger seems back to form - and poised to help the Padres make a run in the NL West.


Clevinger tossed one-hit ball over five shutout innings and combined with two relievers to lead the Padres to a 3-0 win over the Philadelphia Phillies on Tuesday night.

"I definitely think it's just getting back on the horse as many times as I can right now to get back to the feel of the game, the flow of the game," Clevinger said. "Tonight I was able to read hitters' swings and see the game and what's going on."

Clevinger (1-0) won for the first time in three starts this season. He missed last season while rehabbing after Tommy John surgery. The righty tossed five innings for the first time this year, striking out five and walking none over 75 pitches.

"It didn't feel like my heart rate was red-lighting the entire time," Clevinger said. "It really felt like I was comfortable and really under control from pitch one."

MacKenzie Gore struck out four in three scoreless innings in his first professional relief appearance and Taylor Rogers worked the ninth for his 14th save as the Padres moved 10 games over .500 (23-13).

Zach Eflin (1-3) nearly matched Clevinger with five strikeouts over six innings. He gave up a run in the fifth on a forceout.

Robinson Cano, who had singled off Eflin in the fifth for his first hit with the Padres, lined a single in the seventh that left fielder Kyle Schwarber let slide under his glove for an error. Wil Myers, who led off the inning with a walk against James Norwood, scored for a 2-0 lead. Trent Grisham added an RBI double that scored Cano.

Eflin made his first start since May 1 after he was activated from the COVID 19-related injured list.

"I'd be lying to you if I said I wasn't pretty tired out there, but I was happy with the way the ball was coming out," Eflin said. "I was locating in to lefties, which has been something I've been working on before I got COVID. I was happy to kind of just pick right back up on that and get some early contact."


The Phillies returned home from a 5-2 road trip without NL MVP Bryce Harper in the lineup. Harper could miss at least one more game as he recovers from a platelet-rich plasma injection in his right elbow.

Clevinger, who also started this season on the injured list with a sprained right knee, was obtained from Cleveland at the trade deadline during the pandemic-shortened 2020 season. He exited his last start of the regular season with what was later described as an elbow impingement and missed the Padres' wild-card series win against St. Louis.

Clevinger returned for the NL Division Series opener against the Los Angeles Dodgers but was removed in the second inning after his velocity dipped dramatically. The Padres were swept by the Dodgers. He had Tommy John surgery later that fall.

Clevinger is back - and the Padres could be a force with him in the rotation.

"I think the ceiling is super high for everyone involved," Clevinger said.

(SHUT) OUT AT HOME

The Phillies were shut out for the fourth time this season and third time at home.


Harper is expected to return Wednesday or Thursday. The 29-year-old two-time MVP is batting .305 with nine home runs, 14 doubles, 27 RBI, and an NL-best .634 slugging percentage.

Phillies 2B Jean Segura singled in the seventh and extended his hitting streak to an NL-high 13 games.

"I played catch with my wife until she complained that it was too hard and then I just ended up throwing her fly balls," Eflin, on staying loose during his COVID break.