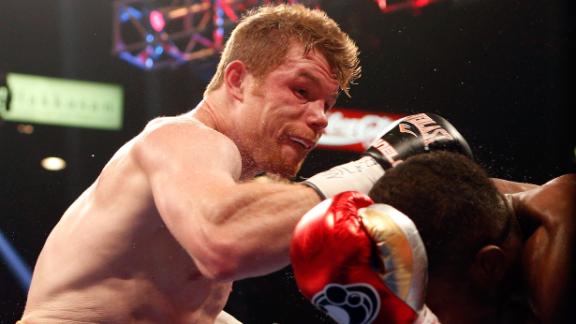 LAS VEGAS -- The presumed May 2 showdown between middleweight champion Miguel Cotto and former junior middleweight titlist Canelo Alvarez, which had been in the works for the past couple of months, is dead.

Golden Boy Promotions president Oscar De La Hoya, Alvarez's promoter, told ESPN.com on Saturday at the MGM Grand that Alvarez was tired of waiting for Cotto to finalize the deal and is moving on with the intention of fighting a to-be-determined opponent on May 2.

"The deal is off the table with Cotto," De La Hoya said. "They did not accept. So Canelo decided to move on. We had a deadline. We had our fifth deadline [Friday night], and Canelo has decided, because Cotto and [attorney] Gaby [Penagaricano] turned down the deal, he is obviously not going to be waiting for nobody.

"He has to move on and resume his career and we have to lock down an opponent. He's still fighting May 2."

A fight between Cotto, who became the first Puerto Rican to win a world title in four weight classes when he knocked out Sergio Martinez in June, and Alvarez, Mexico's most popular fighter, loomed as boxing's biggest match other than the possibility of Floyd Mayweather Jr. facing Manny Pacquiao.

Alvarez removing himself from the Cotto talks now further increases the possibility of Mayweather challenging Cotto for the middleweight title in a rematch rather than Mayweather finalizing a fight with Pacquiao, the latest rounds of negotiations for which have been going on for weeks.

There are many who believe Cotto (39-4, 32 KOs) was taking his time to wrap up the fight with Alvarez (44-1-1, 31 KOs) because he knows he is the most attractive backup plan for Mayweather, a fight that probably would generate more money than a fight with Alvarez.

Mayweather outpointed Cotto to win a junior middleweight title in May 2012 in an exciting fight that generated 1.5 million buys on pay-per-view, one of the best-performing PPVs in history.

Penagaricano said that he and De La Hoya spoke by telephone Friday night and is disappointed that Alvarez has taken himself out of the negotiations. But he added that he and Cotto are not upset and understand.

While declining to get into the specifics, Penagaricano said it came down to the split of the money.

"It's always the financial side. There was no agreement on that," he said. "I don't know what would have happened if we had more time. If Oscar doesn't have more time, he doesn't have more time. It's a great fight, but Miguel doesn't need it for his career. So if it doesn't happen, so be it. He's OK. No problem. If Oscar needs to move he needs to move. We're not going to go back to them. We'll huddle and meet Miguel on Tuesday, and we will start planning."

Today's sanctioning organizations have rules that do not permit fighters to hold titles in multiple weight classes at the same time, but two of them have allowed Mayweather to do it for the past couple of years.

Penagaricano said there is no deal in the works for a Cotto rematch with Mayweather, although he acknowledged that in recent months Mayweather adviser Al Haymon had reached out to him to gauge interest.

"Al and I speak all the time. We have fighters together and other business together, but we haven't talked about that fight [since the initial conversation a few months ago]," Penagaricano said. "Of course, a rematch would be big, but it's not in the pipeline. I don't know what's going to happen."

While Mayweather plans to fight May 2, be it against Pacquiao or somebody else, De La Hoya said Alvarez would still fight on the same day unless Mayweather-Pacquiao is made.

He said Alvarez, who signed an exclusive contract with HBO last fall, would either fight on HBO PPV or HBO, depending on the opponent. De La Hoya said they had several options for Alvarez, but declined to offer any names.

"There's several opponents, so it depends what opponent we choose, then we'll decide if it's pay-per-view or HBO," De La Hoya said. "If Mayweather-Pacquiao happens then that's the only fight that out of respect for the fans, that we will move from [May 2]. But if Mayweather fights Cotto or Amir [Khan] then we're going."

Golden Boy promotes England's Khan (30-3, 19 KOs), a former unified junior welterweight titlist whose name has been connected to Mayweather for a possible fight for the past couple of years. But De La Hoya said if Mayweather picked Khan to fight he would still promote an Alvarez fight on the same day against Mayweather's Showtime PPV event.

Alvarez's fight could take place in San Antonio, where he drew a crowd of about 40,000 for his April 2013 decision win against Austin Trout to unify junior middleweight belts.