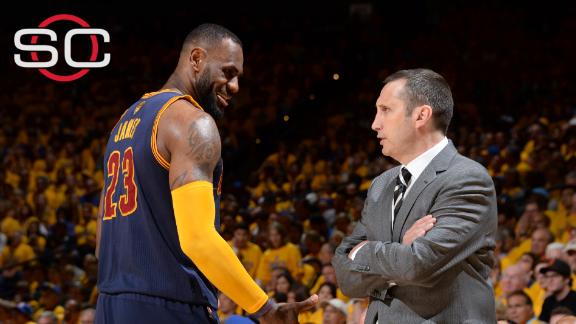 INDEPENDENCE, Ohio -- Speaking to the media two days after the Cleveland Cavaliers' 4-2 series loss to the Golden State Warriors in the NBA Finals, Cavs general manager David Griffin supported the job done by coach David Blatt, and Blatt elaborated on his relationship with LeBron James.

"LeBron himself said he thinks Coach has done a hell of a job," Griffin said Thursday. "So if you want to use his actual words, that's what the man said.

"From my perspective, I've said this all along, you don't go 33-3 (late in the season) with those guys (Kevin Love and Kyrie Irving) healthy and put together the team we had, have it be an offensive juggernaut, and then have to turn around and play without them, be a defensively stifling team, that literally chokes the life out of a 60-win (Atlanta Hawks) team and sweeps them in a playoff series and have your coach not do a hell of a job. (Blatt) did. I think our whole staff did. And we literally won an incredible number of games against very, very good teams playing radically different styles from each other. So from a purely basketball perspective, I'm not quite sure exactly what anybody is looking to have happen."

Griffin then took a shot at reports out there speculating about Blatt's job security.

"So, I think one thing David (Blatt) did as well as anybody I've ever seen, and I wish I did better, was just ignore the noise from the media perspective. Because frankly, none of that means anything. We know what actually takes place here."

Added Griffin: "I can't say I get upset because there have been so many ridiculous storylines about our team all year that I think you get to the point where you understand it's just going to go with it. This is how it's going to be. I think, as I said before, it's difficult for me to understand if you're going purely on basketball achievements what exactly this team left on the table, given what we had. I just don't know what we're really critiquing at this point anymore."

Blatt was effusive in his praise of James after the Cavs forward finished second in Finals MVP voting behind Andre Iguodala, receiving four of the 11 media votes after averaging 35.8 points, 13.3 rebounds and 8.8 assists per game in the series.

"You know, I think it's a special thing to have the opportunity to work with LeBron on a daily basis," Blatt said. "You know, people sometimes judge things on a game or on a period of time, and they forget that we're in there working together and striving to make the utmost of our team and of our situation day-to-day. And a bond develops over time that is a lot more than what meets the eye. It's been a great pleasure and a great honor to work with a player of his magnitude, and to work with someone who is so committed to helping this organization reach its goals, and is so committed to helping his teammates make it to the highest level. And I can just tell you it's been a fantastic experience, and I'm looking forward to continuing it."

Blatt was asked at the beginning of the news conference if he planned to continue coaching the Cavs, and he responded, "Absolutely."

Blatt went on to characterize his relationship with James as more of a partnership.

"Well, people make it out to be more than it is in terms of some personal feeling or challenge," Blatt said. "For me, it's always been about finding ways to help him reach his goals, which is exactly what we want here in the team and in the organization. We want to be a championship team. The most important thing for me in working with LeBron and in working with all of the players is finding out what works, what helps them, what makes them tick, what gives them the kind of confidence and the kind of direction and the kind of partnership that's needed to make this a successful team. I can tell you one thing: It's been a lot of fun, on a number of different levels. It's not just the challenging aspect. It's having the opportunity to work with a truly special, special player. I mean, one of the most, if not the most special player of all time. That's not a small thing. It's invigorating and exhilarating, in all honesty."

Blatt, who just completed his first year coaching in the NBA after more than two decades overseas, admitted to just how big of an adjustment his first season with the Cavs was.

"I think every year you coach differently to a certain extent, depending on your personnel, depending on the mental and the psychological and emotional makeup of different players," Blatt said. "This was a very new kind of thing for me. I've never shied away from saying that. And I went through a pretty radical learning curve, and a very, very highly charged environment. This team came in with great expectations, obviously, and at the end of the day, I think we lived up to them all, if not beyond that. Particularly given what we had to go through near the end of the season when we were arguably the best team in the NBA and suddenly lost the players that we did due to injury."

Blatt was also asked about a story by ESPN's Marc Stein that reported James continued to challenge Blatt's play calls in Cleveland huddles, even in the Finals.

"He is a galvanizing player. He is our best player. He's the league's best player. He's a winner. He's a proven champion. I think it's important that he feels empowered and at the same time that he knows that he's very much a part of this team. And I think he's exhibited that, and always put the team's success beyond his," Blatt said.

"Now if he has felt that he has what to say and wants to impose his will in terms of influencing in a positive way on those around him, that's a good thing. That's a good thing for all, and I certainly encourage that and certainly respected the fact that LeBron's heart was in the right place."

Blatt talks relationship with LeBron
Cavaliers coach David Blatt comments on what it was like to work with LeBron James this past season.