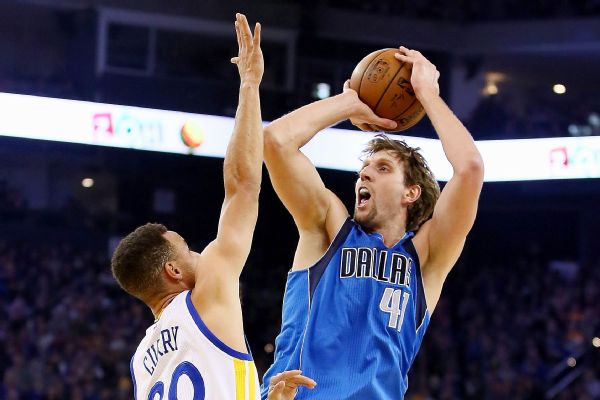 DALLAS -- The sixth-leading scorer in NBA history would have no problem accepting a sixth-man role if it could help the Dallas Mavericks salvage their season.

Dirk Nowitzki starting at center, as Dallas has done recently with coach Rick Carlisle opting to bring Andrew Bogut off the bench, has not proved to be a solution for the Mavs. That starting five has the worst plus-minus of any Dallas lineup this season, getting outscored by 49 points in 48 minutes. The Mavs' lineup with the best plus-minus features Bogut with the other four starters (plus-27 in 54 minutes).

Without hesitation, Nowitzki said he would be on board with coming off the bench while Bogut started when asked about the situation following Thursday's 102-95 home loss to the Phoenix Suns that dropped Dallas (11-25) to last place in the Western Conference standings.

"Obviously, I've said that we want to compete and we want to make the playoffs," Nowitzki told ESPN. "If that means I'm the 10th man, so be it. We've got to try to figure out what we've got and win some games and make a run. If that's what this team needs to win some games. ...

"Boges is smart out there, he's a very good rim protector for that smaller team. I think the coaches always look at every possibility for us to compete and win some games. Throw whatever lineup we need to throw out there to be successful."

Carlisle had no interest in publicly discussing the possibility of a reserve role for Nowitzki, who has sacrificed by taking steep hometown discounts on contracts in the past to try to help the Mavs build a roster capable of contending.

Carlisle chose to scrap the starting lineup the Mavs planned to use entering the season due to poor results in the limited time that Nowitzki and Bogut played together. They have played less than two minutes together since Bogut came back Dec. 27 after missing 11 games due to a bone bruise in his knee.

Dallas has been outscored by 62 points in 53 minutes with the two veteran 7-footers playing next two each other, in part because of the 38-year-old Nowitzki's problems guarding the athletic, perimeter-oriented power forwards who are prevalent in the NBA now. However, those numbers are skewed by blowout losses to theLos Angeles Clippersand Cleveland Cavaliers when a hobbled Nowitzki returned from a strained right Achilles tendon in late November before being shut down for another month.

Nowitzki, who has struggled to find his rhythm while dealing with a minutes restriction as he attempts to rebuild his endurance, has repeatedly stated that it's premature for the Mavs to abandon the plan of playing him alongside Bogut. He mentioned that many teams start games with a more traditional lineup before going small.

"I'm not ready to give up on that starting lineup yet," said Nowitzki, who is averaging 11.7 points on 37.6 percent shooting this season. "We haven't really spent a lot of time out there healthy. It didn't look great preseason, but that's preseason. Everything else after that, I was hurt basically.

"It might be a lineup where we play slower, give the ball to [Harrison Barnes] on the block some, have Deron [Williams] post up some. That lineup sometimes has been challenged scoring, and then once you don't score, teams can run on you. So I think that lineup looked a lot worse when we're not scoring. If we score, we can get back and set our defense and have Boges be a factor there, have our length on the perimeter be a factor. But I don't think we necessarily got a great look at that lineup yet, everybody healthy."

Nowitzki, a 13-time All-Star who has won an MVP and Finals MVP, has consistently been among the league's plus-minus leaders throughout the course of his surefire Hall of Fame career. That has not been the case this season for the 19-year veteran. Nowitzki's net rating is minus-21.3 points per 100 possessions, which ranks sixth worst among the 392 players who have appeared in at least 10 games this season.

"I think it's too early to judge any of that stuff," Carlisle said. "Last year there was all that talk about [Chandler] Parsons struggling [coming off an injury], and I said, 'Hey, don't judge it until after the All-Star break.' And that may be what we're looking at with [Nowitzki].

"This has been a long road, so the good thing is he's moving better. He's obviously feeling good or else we wouldn't have him out there. We're a team that's still trying to put things together. So I don't know if pinning it on him is the way to go. I don't think it is."