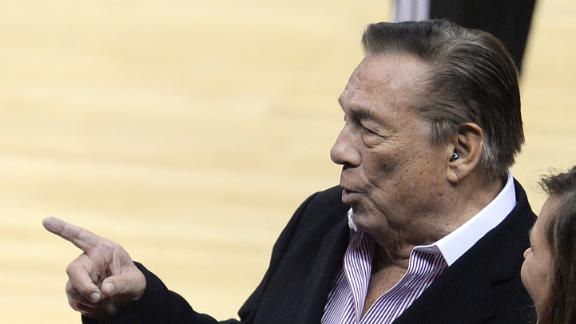 LOS ANGELES -- Donald Sterling filed a suit in Superior Court on Tuesday afternoon seeking damages from the NBA, commissioner Adam Silver and his wife Shelly Sterling, alleging they defrauded him and violated corporate law in attempting to sell the franchise to former Microsoft CEO Steve Ballmer.

Sterling asked for an injunction to freeze the $2 billion sale, arguing that  his wife had no authority to sell the franchise because he is the sole owner and shareholder of the corporation which owns the Clippers, after he revoked the Sterling Family Trust on June 9.

The NBA said it had no comment on Sterling's latest lawsuit.

Shelly Sterling's attorney, Pierce O'Donnell, called the latest lawsuit "a frivolous, last-ditch act of desperation by a delusional, bitter man" who is "obsessed with ruining a record-setting $2 billion sale of the Los Angeles Clippers -- a sale that would solve the problems his racist rant started three months ago."

The new lawsuit comes as testimony in a trial in California probate court continued Tuesday to determine whether Shelly Sterling acted properly in selling the team to Ballmer.

Donald Sterling was removed as a trustee from the trust when two neurologists examined him and determined he was mentally incapacitated and unfit to conduct his legal and business affairs. He has since objected to the sale. Donald Sterling has also filed a federal lawsuit against the NBA seeking $1 billion in damages.

It is not known whether the judge in probate court will seek to consolidate this lawsuit with the current trial.

"I think you're looking at some time into the future," Samini said when asked when Tuesday's lawsuit could be resolved. "Could you get to trial in six to eight months? In a perfect world, it's possible, but you're looking at a year or so before you have a trial on that issue. ... We're not working on deadlines."

It is not known whether the probate-court judge will seek to consolidate Tuesday's lawsuit with the current trial.

"He's worth more than $2.5 billion without the team," Samini said. "If he was greedy, he would take the money and run. It's not about the money. It's not even about wanting the team. It's showing everybody: If I have a conversation in my living room that's inappropriate, that's not a good thing. I shouldn't be awarded the man of the year award, but at the same time, my private conversation, and on top of that my medical records, shouldn't be OK to release that to the world and use that to hang me with."