Eli Apple: Giants are not pressuring me to silence Mom's opinions 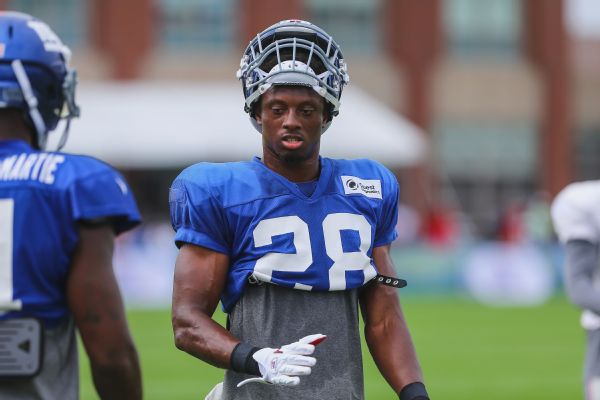 This is the result of Annie Apple's outspoken nature in her Sports Illustrated columns and presence in mainstream media. Annie Apple also works for ESPN as a contributor to Sunday NFL Countdown.

She has written in recent weeks about the Josh Brownsituation, as more details became public about the former Giants kicker's 2015 domestic violence arrest. Annie Apple wrote about her personal experiences with domestic violence, and she criticized Giants co-owner John Mara for comments he made.

In her most recent Sports Illustrated column, posted late in the afternoon on Wednesday, Annie Apple wrote about being "livid" with the Giants because of her belief that the team was leaning heavily on her son in an effort to control her. She also wrote about deciding to skip the Giants' most recent game against the Los Angeles Rams, even though she made the trip to London -- a move that "definitely hurt" her son.

Eli Apple remembers it as being the first game his mother has missed since he was in high school.

Apple was asked seven minutes' worth of questions Thursday, exclusively about his mother, her columns and their relationship, rather than anything about this week's matchup with the Philadelphia Eagles. He said he expected it but also denied that the team was leaning on him to keep her quiet.

"I'll tell her [they're not pressuring me]," Apple said.

Apple said he didn't yet read his mother's latest column, titled, "Why I will never stop speaking out against injustice -- from the Giants, the NFL or beyond."

None of his teammates had said anything to him about the situation as of Thursday afternoon. The situation has put the cornerback in a strange position as he tries to get his rookie season on track. Apple has missed two of the Giants' first seven games and left early in two others because of hamstring and groin injuries.

He was prepped by Giants personnel Thursday that he would be facing questions about his mother and her most recent column.

"It's definitely a weird position, of course. You want to just focus on football and have football be your main focus," Apple said. "Sometimes when things like this come up, it makes it a little bit hard because you're thinking about it a little bit. But you just have to move on from it, talk to her a little bit and try to speak your mind a little bit and move forward."

But there is only so much he can do. Apple isn't about to reprimand or silence his mother.

Annie Apple is her own person, and like Eli, she has her own career, he said. It's up to the two of them to make sure they can co-exist. Eli Apple thinks it can happen.

The conflict of interest between columnist and player was always a potential outcome, with the mother's and son's careers so intertwined.

"I knew there were going to be some things that come with it because I know how she is," Apple said. "She loves to be vocal and certain things and she has a big voice and definitely gets out to a lot of people.