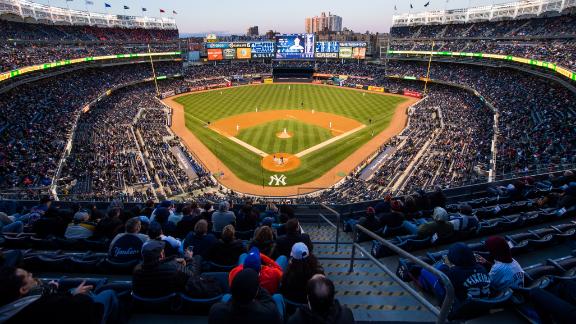 The New York Yankees are the most valuable team in baseball once again. With a $3.4 billion valuation, the team extends its streak of being at the top of the list since 1998, when Forbes began estimating the worth of Major League Baseball teams.

The Yankees are the only baseball team worth more than $3 billion, and Forbes says the team is worth $900 million more than the second-highest-priced team, the Los Angeles Dodgers ($2.5 billion).

The four Steinbrenner children, whose late father, George, bought the team with two other partners for $8.8 million in January 1973, don't plan to cash in anytime soon.

Hal Steinbrenner told ESPN earlier this month that the family has no intention of selling.

The Boston Red Sox ($2.3 billion), San Francisco Giants ($2.25 billion) and the Chicago Cubs ($2.2 billion) round out the top five. Those are the only teams worth more than $2 billion, but it's a remarkable feat considering that Forbes valued only five franchises at more than $1 billion just two years ago.

The average team is now worth $1.2 billion, according to the Forbes calculations.

National and local television money have boosted the value of the teams in recent years, as has land development around the stadium, controlled and owned by teams, which include the Giants and Cubs. Digital revenue is also on the rise, with team owners equal investors in the league's Advanced Media company.

That the Yankees aren't for sale isn't entirely accurate. Bloomberg recently reported that an investment firm was selling a 1 percent stake in the team for $24 million and that prospective documents valued the team at approximately $2.75 billion.

When Steinbrenner and his partners bought the team for $10 million, then-owners CBS were selling the team at a $3.2 million loss.

The $3.4 billion valuation would make the Yankees the second-most valuable sports franchise in North America. Last September, Forbes estimated the Dallas Cowboys were worth $4 billion.