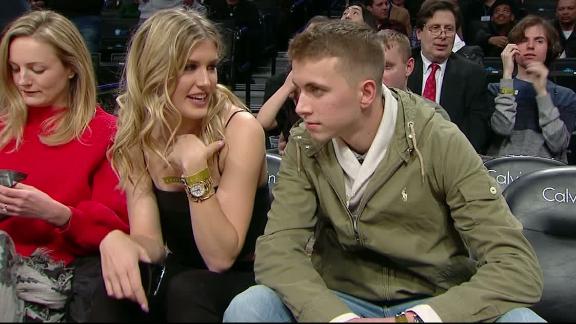 NEW YORK -- Genie Bouchard kept her word -- and then some -- after the Atlanta Falcons' epic collapse in Super Bowl LI.

The Canadian tennis star and now swimsuit model sat courtside at aBrooklyn Netsgame Wednesday night with a fan who asked her on Twitter for a date if the New England Patriots won the Super Bowl.

Bouchard tweeted during the Super Bowl that she knew the Falcons would win. A fan named John Goehrke responded to her by writing "if patriots win we go on a date?" and she responded "Sure."

The Falcons then blew a 25-point lead as the Patriots rallied to win in overtime, and Bouchard agreed to keep her word. In New York for ceremonies tied to the Sports Illustrated swimsuit issue, in which she appears, she met Goehrke earlier Wednesday, and they sat together for the game against the Milwaukee Bucks, even walking on the court and throwing some souvenir balls into the stands.

After the date, Bouchard told TMZ that she had planned the date, but that "for sure" she'd have a second date with Goehrke.