Harper out of Phillies lineup after getting plunked 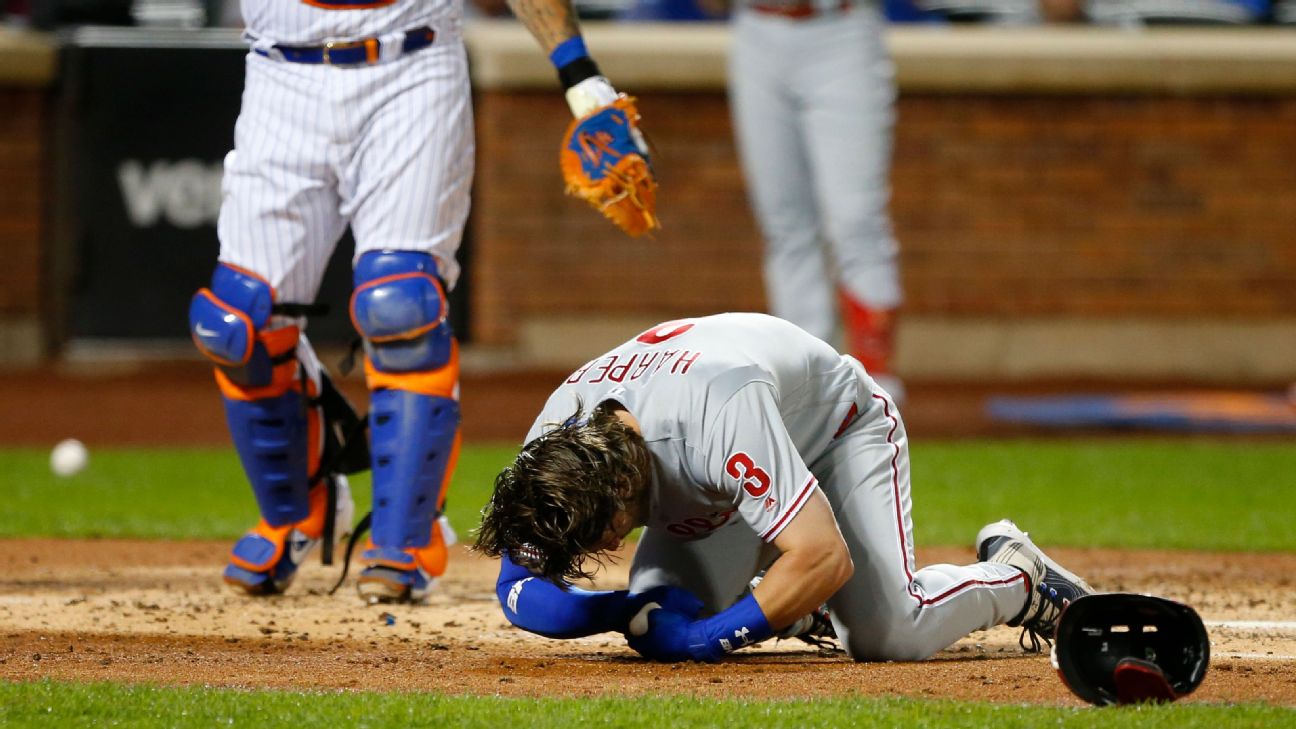 ESPN
NEW YORK -- Philadelphia Phillies right fielder Bryce Harper exited Friday night's game against the New York Mets with a right-hand contusion after he was hit on the right hand by a pitch from Mets starter Steven Matz in the third inning.

X-rays were negative, but Harper said after the game that he could not grip a bat, and he was not in the lineup Saturday.

"I don't know yet. See tomorrow how I feel," he said on Friday night. "Of course, we're in the stretch right now, so if I can be in there, I'm gonna be in there. But gotta be careful too."

Harper, batting with one out and a runner on third, was ahead in the count 1-0 when Matz's 93 mph fastball sailed up and in on him. Harper recoiled and the ball ricocheted off his hand.

The 26-year-old fell to his knees and gripped his hand in pain before getting to his feet and walking back to the plate, where Mets catcher Wilson Ramos appeared to ask Harper how he was doing. Harper put his head on Ramos' shoulder before Ramos, a former teammate with the Washington Nationals, patted him on the shoulder.

After a brief visit from a trainer and manager Gabe Kapler, Harper trotted to first base. He was retired at second on an inning-ending double play by Rhys Hoskins, after which Sean Rodriguez trotted out to replace Harper in right field.

"Any time it squares you up a little bit, it's scary," Harper said. "Definitely wanted to get on first and keep the game going. But yeah, it wasn't good."

Hoskins took offense to a pair of up-and-in pitches from Jacob Rhame on April 23 and punctuated his displeasure by taking a 35-second home run trot after going deep off Rhame the next night.

On July 6, Phillies right-hander Jake Arrieta hit three Mets batters. Todd Frazier, the second batter plunked by Arrieta, was ejected for arguing after home plate umpire Tripp Gibson warned both teams. Two batters later, Arrieta wasn't ejected after hitting Amed Rosario with a changeup, though New York manager Mickey Callaway was tossed for arguing. After the game, Arrieta said if Frazier was unhappy about being hit, "he can come see me and I'll put a dent in his skull." 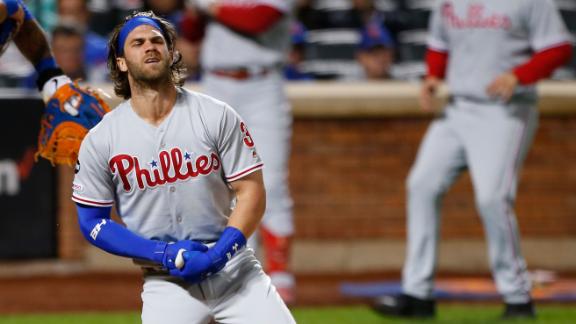 Harper hit on hand by pitch
Bryce Harper is hit in the hands by a Steven Matz pitch and would have to leave the game in the third inning.
Report a correction or typo
Related topics:
sportsespnmlbphiladelphia philliesbryce harper
Copyright © 2020 ESPN Internet Ventures. All rights reserved.
More Videos
From CNN Newsource affiliates
TOP STORIES