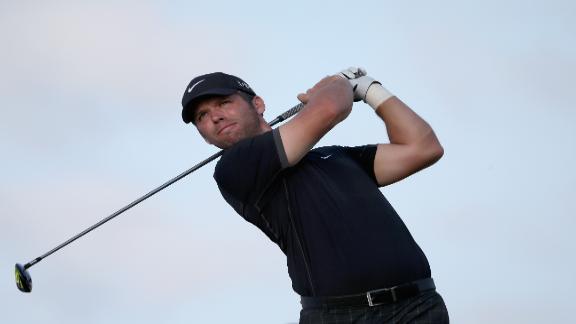 PALM BEACH GARDENS, Fla. -- Ian Poulter didn't realize he had a three-shot lead in the Honda Classic, only that he was playing well enough to feel like he was in control of his game and the tournament.

One shank changed everything Sunday.

"That just came out of left field," Poulter said.

His next tee shot that splashed down in the water left of the fairway made it even worse.

What had been a marathon day at soggy PGA National suddenly turned into a sprint-to-the-finish on Monday morning when the final round was to resume. Poulter lost command of the Honda Classic, but he didn't lose his place atop the leaderboard.

He was at 7-under par through seven holes, tied with Paul Casey, who went out in 31 and was in the left rough on the 10th hole when the final round was halted at sunset.

Patrick Reed, in the final group with Poulter, was one shot behind.

Phil Mickelson was among four players who were three shots behind at 4-under par. That group included Daniel Berger, the PGA Tour rookie from West Palm Beach whose final shot Sunday was a 35-foot chip-in for birdie on the 11th hole.

"I'm pretty pleased with the golf I've played throughout the whole of today," Poulter said. "I haven't really made many mistakes at all. I've put it in position an awful lot, which is encouraging right now. And If I do that tomorrow, then I'm going to be in a good position."

His two mistakes were big ones.

Leading by three shots, he tried to take a little off an 8-iron on the par-3 fifth hole, where the green is guarded by water on the left. Poulter hit a shank that went so far to the right it bounced into water on the sixth hole. He made double bogey and lost the lead.

On his next tee shot, he pulled his drive into the water down the left side of the sixth fairway and had to two-putt from 65 feet to escape with bogey.

"You take your foot off the accelerator for one second, all of a sudden you find yourself completely out of position," Poulter said.

For a day of plodding across the rain-softened fairways, the Honda Classic suddenly was full of energy, not to mention possibilities. There was a three-shot swing at No. 5 when Reed holed a 35-foot birdie putt from a swale right of the fifth green and Poulter made his double bogey. Reed took the lead on No. 6 when Poulter made bogey.

And then Poulter was on the right end of a two-shot swing at their final hole of the long day, the par-3 seventh. His eyes a little wider, his blood boiling, Poulter drilled a 6-iron into 3 feet for birdie, while Reed missed the green to the left and failed to get up-and-down.

No longer forgotten was Casey, who made four birdies on the front nine, all from no more than 12 feet. His birdie on No. 9 moved him into a share of the lead.

The Monday finish was caused by nearly 5 inches of rain and 50 mph gusts that washed out the third round on Saturday and took a 78-member grounds crew until 10 a.m. Sunday just to get the course ready. It had so much water that the crew had to chase off an alligator from the bunkers. Players finished the third round and went right back out to squeeze in as many holes as possible. The final round was to resume at 8 a.m.

"This sort of situation is going to be difficult for everybody, and it just breaks up momentum," said Casey, who had more than anyone. "Some guys will carry it through tomorrow. Others won't, and that's very difficult to predict. ...You just hope you wake up tomorrow and you feel like you've got the same kind of golf swing and putts are going in the hole. You just don't know. Hope the golfing gods are nice to us tomorrow."

That's what Mickelson was thinking.

"I'm looking forward to just having a minute to regroup and take a look at what's going on," Mickelson said.

Jeff Overton, Brendan Steele and Russell Knox, who lost in a four-man playoff last year at PGA National, also were at 4 under.

Poulter was right about one thing. He did play some good golf, except for those two holes. He was bogey-free for a 66 in the third round, taking him from a two-shot deficit to a three-shot lead over Reed and Padraig Harrington going into the final round. It was his first 54-hole lead on the PGA Tour.

Harrington twice missed short putts -- making bogey on No. 4 and double bogey on No. 6 -- and was at 3 under.

Poulter at least was pleased with how he left the course with that 6-iron for birdie. He will try to end more than two years without a victory.

"Silly things happen," he said. "Tiring, and made a couple of really bad swings on 5 and 6. But that kind of angered me inside enough to spark a little bit of energy there to hit a good shot on 7."

Casey, Poulter Tied Heading Into Monday
Paul Casey and Ian Poulter are tied for the lead at the suspended Honda Classic. The final round play will resume on Monday.