Irish's Brian Kelly: QB change about trying to 'get some energy back' 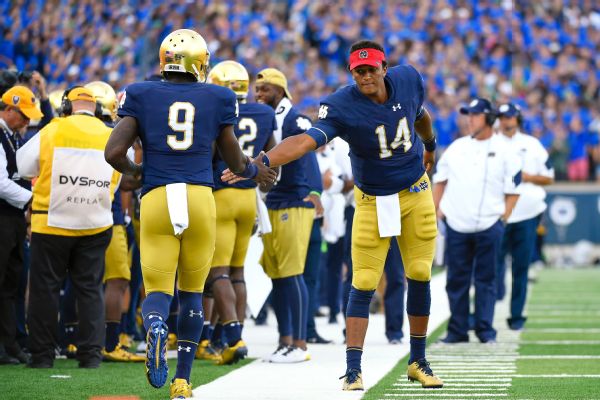 SOUTH BEND, Ind. -- Notre Damecoach Brian Kelly said starting quarterback DeShone Kizer was not hurt and it was his decision to replace him with reserve quarterback Malik Zairein the third quarter of the Irish's 17-10 loss to Stanfordon Saturday night.

Kelly said he wanted his team to get momentum back after Kizer threw interceptions on the first two drives of the second half, which Notre Dame opened with a 10-0 lead.

"Those are coach-player conversations," said Kelly, who put Kizer back in the game for the Irish's final drive. "I just felt like it was important to try to get some energy back. We lost some energy, and I thought going to Malik would do that, and then just, again, with DeShone's experience, felt like giving him a shot at the end, that would give us our best chance of winning."

Zaire had two three-and-out drives sandwiched between a one-play drive from his own 5-yard line that began and ended with a high snap that went out of bounds for a safety, cutting the Irish's lead to 10-9. The crowd booed heavily following Zaire's final drive of the game and later voiced its approval when Kizer was reinserted for the game's final drive.

Kizer finished the game 14-of-26 passing for 152 yards with no touchdowns and two interceptions, the first of which was returned 50 yards for a touchdown. He added a team-best 11 carries for 83 yards and a rushing touchdown. Kizer re-entered with 3:44 left in the game and led a 15-play, 61-yard drive that ended when he was stopped short and lost the ball on a fourth-and-10 run from the Stanford 14-yard line on the game's final play.

Zaire finished the night 0-for-2 passing with 3 rushing yards.

Kelly said during fall camp that both quarterbacks would play this season, but Kizer emerged as the starter after outperforming Zaire in the Irish's season-opening loss at Texas. Kelly reiterated after Saturday's loss that Kizer is the Irish's starting quarterback.

"I don't think there's really a question about who the starting quarterback is: DeShone is the starting quarterback," said Kelly, whose team fell to 2-5 as it enters its bye week."Each game is treated as a game in itself. We're trying to win the game. Malik is a really good quarterback. I was looking for a little bit of energy and kind of stem the tide and the flow of the game, but DeShone Kizer is the starting quarterback."
Related topics:
sportsespnstories about the city of chicagobackupstartermalik zairedeshone kizercollege footballbrian kellyreserveqb changenotre dame fighting irish
Copyright © 2022 ESPN Internet Ventures. All rights reserved.
TOP STORIES
Officials to announce arrest in fire that killed Philly firefighter
Off-duty corrections officer robbed, carjacked in Philadelphia
2 shot dead after trying to break into South Philly home: Police
Boy Scouts jump into action after Missouri Amtrak train derailment
2 states battle abortion trigger laws; pharmacies limit Plan B sales
50 migrants die after 18-wheeler abandoned in Texas heat
AccuWeather: Bright, less humid the next few days
Show More
Jan. 6 panel to hold surprise hearing, present new evidence
Long-term plan for Navy Yard to be unveiled today
3 dead, at least 50 injured after Amtrak train derails in Missouri
AAA projects record-breaking holiday travel, gas prices
11-year-old girl in South Jersey dreams of playing in the MLB
More TOP STORIES News