Isaiah Thomas not suspended for hitting Dennis Schroder in head 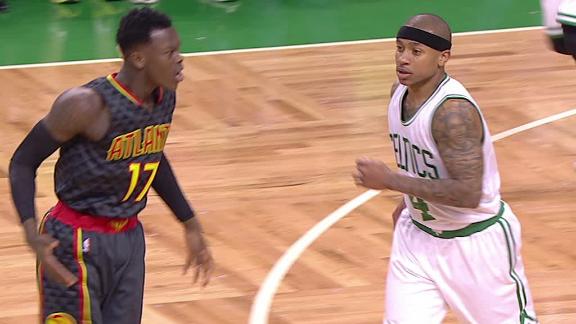 BOSTON -- Celtics guard Isaiah Thomaswill not be suspended by the NBA for Friday's incident with Atlanta'sDennis Schroder, and instead has been assessed a flagrant-1 foul heading into Game 4 of the Eastern Conference first-round series against the Hawks.

With 1:27 left in the first quarter of Boston's chippy 111-103 victoryFriday night, Thomas and Schroderwere hit with double technical fouls after jawing at each other. As the two were heading downcourt before the verbal exchange, Thomas could be seen throwing his left hand at Schroder's face.

"It was the right call," Thomas said of the league's decision. "I'm really focused on Game 4, but I'm glad I wasn't suspended."

Thomas said the league didn't call him on the matter and official word on his status didn't trickle through until the Celtics were on the floor for an afternoon practice.

Schroder, who practiced Saturday before the NBA made its decision, believes that Thomas should have been suspended, given the rules and points of emphasis the Hawks were told entering the playoffs.

"I still feel disrespected [about] what he did," Schroder said."I [had] just scored a basket and tried to go back on defense and he smacked me. It had nothing to do with basketball.

"We talked with the referees before the playoffs, and what they told us is what he did to me yesterday is a suspension. I can't control it. ... It is on the [league memo] and Coach [Mike Budenholzer] told us that we can't do this, we can't do that, it is going to be a suspension."

Thomas, who scored 42 points to help the Celtics cut the Hawks' lead in the series to 2-1, was excited to know he'd be on the floor for Game 4 on Sunday. However, he admitted he was worried that the NBA might make a statement by suspending him.

"How much [the Hawks] were complaining about it [after the game], yeah," Thomas said. "I'm focused on Game 4, man. They made the call of what it was, a flagrant-1, whatever it was. I'm glad I'm able to play."

Said teammate Marcus Smart: "I think everybody's glad that nobody got suspended."

"I don't lose a lot of sleep over things I don't know a lot about or don't have control over," Celtics coach Brad Stevens said Saturday. "I didn't worry about it too much. We talked about it as a staff a little bit this morning. But, you know, move on with whatever the call is."

Budenholzer, after learning of the NBA's ruling, said the Hawks just need "to move on," even if he felt the league's points of emphasis entering this postseason were more "black and white" this year.

"It is required that we make our players aware of points of emphasis in the playoffs," Budenholzer said. "I thought this year, the information felt even more clear and more demonstrative. We have all been in the league for a long time. It may have been the exact same memo as it has been for 20 years, but this year it seemed a little more, I don't know, just black and white and we wanted to make sure everybody was aware."

In another incident, Smartwas fined $5,000 for a flopping violation in the second half of Game 3.Celtics president of basketball operations Danny Ainge talked with Smart about the fine at practice Saturday.

"I was just trying to make winning plays for my team," said Smart, who flailed sideways while battling Kyle Korver for a rebound in the fourth quarter. "We had a great game last night, that's really what my focus is on."

Game 4 is Sunday night in Boston.