'It's kind of scary': Simmons says he's just getting started 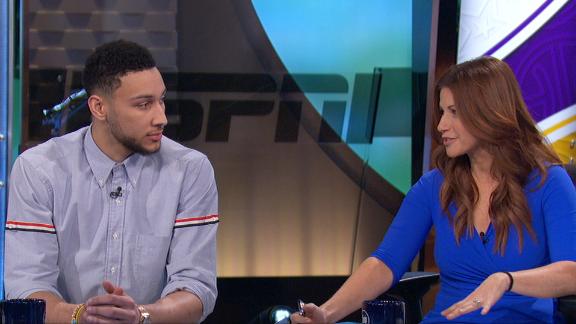 ESPN
By Nick Metallinos
Los Angeles - Ben Simmons has no intention of proving to the rest of the NBA fraternity that he should have been an All-Star this season by making a conscious effort to aim for the MVP Award of the Rising Stars game at Staples Center.

Simmons, who was overlooked for the main event on Sunday, said his main focus was helping the World Team defeat the USA, and not the MVP Award.

"You trying to get me to answer that? I see what you're doing," a jovial Simmons joked with an Australian reporter at media day Friday.

"Winning the game - that comes first," he added. "There's no MVP without winning so we'll see what happens."

It's been a phenomenal start to Simmons' NBA career. He's been one of the favorites for the Rookie of the Year title since the first week of the season, and is putting up numbers that have seen him draw comparisons with legends like Magic Johnson and Oscar Robertson.

Despite the impressive start, Simmons said the comparisons to those NBA legends was "surreal" and believes he's only scratching the surface of his potential.

"I look at it and see Magic Johnson, Oscar Robertson and then Ben Simmons. I think that's amazing. But, I wanna break those records. I think it's really cool to be up there with those guys, but at the end of the day, it means a lot to get stats, but I just wanna win."

Simmons missed out on selection to Sunday's All-Star game -- he didn't secure enough of the fan vote, and was not voted in by coaches -- but the Australian said he had moved on from being left out, adding he understood that it's tough to be selected as a rookie.

Simmons may have to wait at least one more season to become Australia's first ever representative at the NBA's showcase event, but he'll join Andrew Bogut, Matthew Dellavedova, Dante Exum and Thon Maker as Australians to represent the rookies and sophomores in the Rising Stars Challenge.

This weekend's celebrations are another highlight in a season full of them for Simmons. In between media and sponsor commitments, he admits he hasn't had time to soak the experience in just yet, saying it's likely something he'll look back on afterward.

"It's kind of weird," he said. "I haven't really taken it in yet, but once it's all over I'll be looking back like, 'wow, it's amazing.' I'm trying to enjoy every moment of it."

While Simmons isn't specifically shooting for the MVP Award, he does have one record in mind that will look to break.

"I actually want to get the assist record," he stated. "I don't know what it is, but I wanna get that."

The assist record currently belongs to John Wall of the Washington Wizards, who dished out 22 assists in the 2011 game.

Simmons' squad features a couple of his 76ers teammates in Joel Embiid and Dario Saric, along with Bogdan Bogdanovic from the Sacramento Kings, andLauri Markkanenfrom Chicago - all more than capable shooters to help him secure a new record.

Simmons has just one piece of advice for them.

"I told them whenever they get the ball to shoot," he said.