Jim Boeheim to retire in 3 years 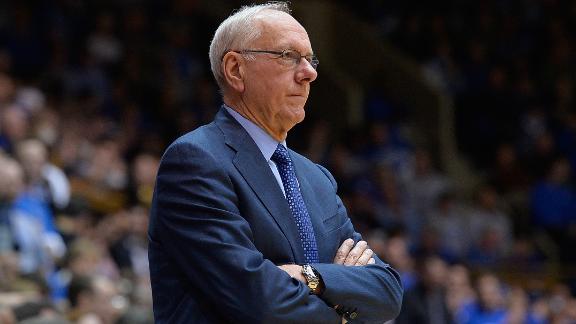 Syracuse men's basketball coach Jim Boeheim will retire in three years, and athletic director Daryl Gross has resigned to take another position at the school in the wake of harsh NCAA sanctions levied against the university earlier this month.

The school also announced it will appeal certain portions of the NCAA's penalties.

Syracuse chancellor Kent Syverud issued a statement to the university community notifying it of the news Wednesday.

"Coach Boeheim has also told me that he intends to retire as head coach in three years," Syverud said. "His goal in making this decision and announcement now is to bring certainty to the team and program in the coming years and enable and plan for a successful, longer-term transition in coaching leadership. Coach Boeheim's commitment to ensuring that the men's basketball program remains strong even after his tenure is just one more example of his deep loyalty to our University."

Longtime assistant coach Mike Hopkins, a former star for the Orange, is in line to succeed Boeheim.

Gross is in his 10th year as Syracuse's athletic director and has helped the athletic program, among other things, depart the Big East for the ACC. He will transition to vice president and special assistant to the chancellor and adjunct professor in the David B. Falk College of Sport and Human Dynamics.

"As part of my discussions with him, Dr. Gross has asked to conclude his tenure as director of athletics and transition to a new role at the University that can benefit from his background and experience in the areas of marketing and advancement," Syverud said in the statement. "He believes this transition will allow SU Athletics to move forward and position itself for continued future success."

Steve Ballentine, who is a board of trustees member and serves on the board's athletic committee, will chair a small committee to assist the school in its search for a new athletic director.

On March 6, the NCAA suspended Boeheim for nine ACC games, took away 12 scholarships and ordered 108 wins be vacated as a result of a multiyear investigation into the university's athletic programs. Penalties also included five years of probation and the vacating of 11 football victories from the 2004-06 seasons.

The school had already self-imposed a postseason ban for its men's basketball team this season. The NCAA said the violations, which dated to 2001 and were self-reported by Syracuse, involved academic misconduct, extra benefits, failure to follow the drug-testing policy and impermissible booster activity.

"The University does not agree with all of the conclusions reached by the Committee on Infractions and does not agree that the full set of penalties imposed by the committee are appropriate or equitable," Syverud wrote to members of the university community. "We remain disturbed by the severity of certain penalties and the characterization by the NCAA of certain facts surrounding the case. After a full discussion with the Board of Trustees Athletics Committee, the University accepts some of the penalties imposed by the committee but will appeal the vacation of certain wins for the men's basketball program and the reduction in men's basketball scholarships.

"The decision to appeal is not taken lightly. However, based on the facts and a review of previous NCAA infractions decisions, the University believes the impact of these specific penalties is excessive and disproportionate. The University also will support Coach Boeheim, should he choose to appeal penalties that affect him personally."

The announcement of the changes comes less than two weeks after the season finale. At a postseason banquet the day after the Orange lost at North Carolina State to finish with a record of 18-13, Boeheim, the second-winningest coach in Division I history, with 966 victories, told an audience of around 700 fans that he wasn't about to leave as basketball coach.

Boeheim will address the media in a news conference at 10 a.m. ET Thursday.

Boeheim Plan About Continuity
Andy Katz discusses Syracuse coach Jim Boeheim's decision to retire in three years and what it means for the program.