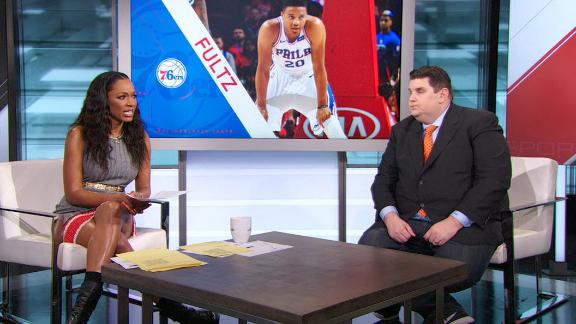 Videos of Philadelphia 76ers rookie Markelle Fultz taking shots hit social media after many of the team's practices. It has become something of a cottage industry for "experts" to spend time dissecting the form of the No. 1 overall pick in June's NBA draft.

Fultz has been sidelined by a shoulder injury that contributed to an altered shot before the team shut him down to heal and then rebuild his shooting technique. Fultz isn't made available to the media, but veteran teammate JJ Redick came to his defense Friday, before the 76ers beat the visiting New Orleans Pelicans 100-82.

"He's working his [butt] off," Redick told reporters, according to the Philadelphia Inquirer. "I understand that fans want to see his progress, but this is maybe going to [be] a longer process than we all hoped for. He may be back on the court soon. I don't know. That's not my thing.

"But I don't get the coming in here every day to like watch him shoot pull-up jumpers. That's a little obsessive."

The intrigue around Fultz deepened Friday when 76ers general manager Bryan Colangelo wouldn't offer a timeline for Fultz to return; nor would he say whether Fultz will even play again this season.

Fultz's shooting woes became apparent during the preseason, and Fultz was shut down just four games into the season. Colangelo said Friday that Fultz is currently limited to shooting from within the free throw lane and isn't attempting shots from the perimeter.

While saying he wouldn't speak for Fultz when asked how the rookie is handling his recovery, Redick said teammates are there for him either in person or via group text messages.

"We all want to see him back on the court and enjoying what he loves to do," Redick said.

For now, though, fans only get to see glimpses of Fultz via videos, much to the chagrin of Redick.