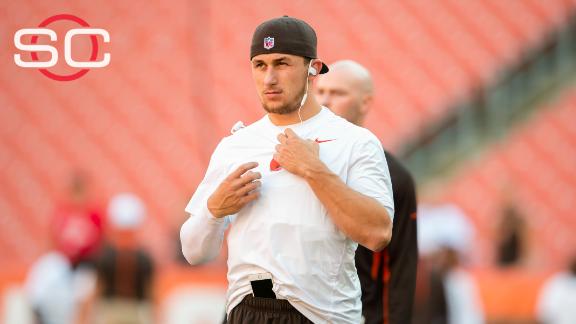 BEREA, Ohio -- Browns quarterback Johnny Manziel said Tuesday that he's managed elbow soreness since his freshman year in college and that he does not need surgery.

Manziel hasn't thrown a pass since Aug. 23, when his elbow flared up during practice. He was shut down from playing in Cleveland's final two exhibition games, and he and the Browns believe rest should take care of the soreness.

"No, this is an injury that from everything that I've heard; no matter what the case, it wouldn't require [surgery]," Manziel said. "More than anything it's just sore, it's just a little bit of overthrowing, and making sure you're icing and doing what I need to do."

Manziel said surgery is not an option, and the Browns reached out to famed orthopedist Dr. James Andrews for a second opinion.

The 22-year-old said he should be able to resume throwing next week. Manziel is confident the problem will not persist during the regular season.

"Throwing during the year is nothing like it is during camp, so I'm very confident it's not going to creep back and there won't be other problems," Manziel said. "I think it's just mixed with camp and the amount of days we were going out, and I think that was the main focus of it. So I don't expect it to go away completely, because this is kind of an injury that I'll feel a little bit of tightness. Your elbow will get sore just from being a QB and throwing, but that's not anything out of the ordinary."

Manziel said NFL teams were aware of his arm issues while he was at Texas A&M, and it was brought up during the draft combine.

"Yeah, I think I went and got MRIs," Manziel said. "Teams kind of poked on me and prodded on me while I was at the combine, but for the most part, to the best of my knowledge, it didn't raise any red flags, and I don't think it necessarily hurt where I was drafted and where I ended up, so that would be more of a question for the Browns.

"But I'm sure they and every other team did their history before using a first-round pick."

Information from ESPN contributing writer Jason Gibbs was used in this report.