LeBron James on J.R. Smith holdout: hate not having 'one of my big guns' 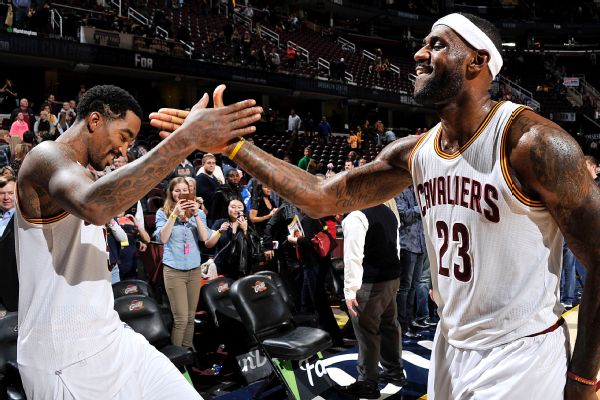 INDEPENDENCE, Ohio -- It only took until the close of the Cleveland Cavaliers' first week of training camp before LeBron James stuck his neck out into the stalled J.R. Smith negotiations and publicly stumped for the holdout guard.

"I hate coming into another season -- two years in a row -- with one of my big guns not here," James said, alluding to Tristan Thompson, who missed most of training camp last fall with a similar holdout situation. "So, for a leader of a team and for me personally, I just hate to deal with this s--- again.

"It's just too big of a piece to our team to have to deal with in another training camp. Like I said, hopefully things get resolved fast, because you know how big and important he is to our team."

James' comments came unprompted. In fact, a team public relations staffer told James he was free from media obligations for the day but James chose to meet with reporters anyway.

Like Thompson and James, Smith is represented by Rich Paul of Klutch Sports.

Multiple sources told ESPN that the Cavs have offered a three-year escalating contract to Smith with a partial guarantee in the fourth year, bringing the total guaranteed money north of $42 million -- the same amount Jamal Crawford got when he re-signed with the LA Clippers this offseason, except his deal only included $30.5 million guaranteed.

A source familiar with the negotiations told ESPN on Friday about the Cavs' offer: "I don't see it changing anytime soon."

"Negotiations are always two-sides," James said, "but J.R. did his part. J.R. did his part. He showed up every day. Worked his ass off every day. Became a two-way player, a model citizen in Cleveland and he's a fan favorite, obviously we all know that. All of the sudden now he's a season-ticket holder at the Indians games."

The Cavs will start Iman Shumpert in Smith's absence, according to coach Tyronn Lue. Shumpert told reporters Friday he came into camp at 212 pounds, the lowest playing weight of his six-year career, and spent the offseason honing his offense.

Smith represents the fourth Cavs player in the past 10 years -- Anderson Varejao, Sasha Pavlovic and Thompson are the others -- to have contract negotiations bleed into training camp.

Outside of the Cavs, Smith's options are limited. The only teams with significant cap space remaining -- the 76ers, Nuggets, Nets, Suns and Jazz -- are either in rebuilding mode or already stocked at his position.

Lue wouldn't entertain the thought of negotiations falling apart and Smith going elsewhere, but -- when pressed -- said the team could withstand his departure if it came to that.

"We're saying that he is going to come back," Lue said. "If he doesn't come back, we understand it's a business and we just have to move forward. No excuses. Next man up. Next man has to be ready. We have some great pieces around who can also step in and play a role for us on this team."

"We're missing a piece, but we still have enough talent," James sad. "We can't become full until he's here, but that doesn't deter anybody or any of the guys that's coming in to show up every day. We're still working our tails off and everybody who is filling in has been working extremely hard through this camp so far and we're going to continue to do that."

Lue also said Smith is not significantly hurting his chance to contribute this season by missing training camp.

"When you've been in a system for two years, you don't fall behind," Lue said. "The biggest thing is probably being in shape. He knows our offense, he knows our defense. We're not changing anything. I don't think from that standpoint he'll be behind at all."

While the prevailing sentiment is that the sides will come together eventually, James warned that one can never consider anything a done deal before it's actually done.

"Well, I always use this reference: It's like you're buying a house," James said. "You can go find a house, you do all the negotiations and all that, but you never got the house until it's closed and you got the keys. Last minute, someone can step in. Escrow could fall through or something. Then it ain't your house no more.

"So, J.R. is a free agent. He's not ours. He's still my brother right now. And I feel like when I play 2K17, he's still on the Cavs, so he's on my roster there, but it wouldn't be good if he was not here. It wouldn't be good for any side.

"We just miss him. We miss having him around. He's a big piece of our team and they just need to get it done."