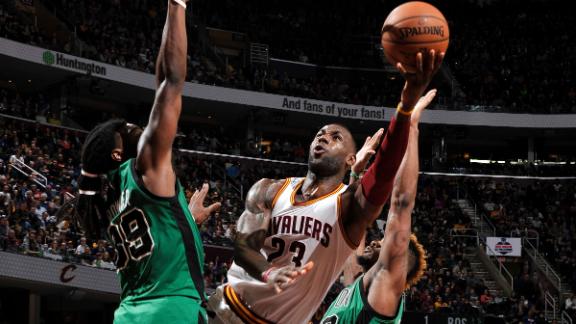 James hit a pair of milestones in the Cavs' 120-103 win over the Boston Celtics, first becoming just the third player in NBA history with 700 consecutive games with 10 points or more, joining Michael Jordan (866) and Kareem Abdul-Jabbar (787). James' streak began on Jan. 6, 2007, and has stretched for more than nine seasons.

Later, when scoring the 16th and 17th of his game-high 28 points on a layup with 4:43 remaining in the third quarter, James passed Tim Duncan for 14th on the career scoring list. Duncan, who has 26,366 career points, was given the night off to rest in the San Antonio Spurs' 104-94 win over the Sacramento Kings.

James and Duncan are forever connected, combining for six league MVPs and meeting in the NBA Finals three times, with Duncan's Spurs holding a 2-1 edge over James. The two teams could very well meet in the Finals again this season as the Cavs (44-17) are first in the East and the Spurs (52-9) are second in the West.

After San Antonio swept Cleveland out of the 2007 Finals, Duncan famously told James, "This is going to be your league in a little while, but I appreciate you giving us this year."

James was asked what that conversation meant to him at the time.

"It means a lot just coming from a guy like himself, but I was young, very young, and it always stuck with me," James said. "I've been fortunate I've been able to play in this league with him being in there as well."

Of course, while James might have taken over the league in terms of individual accomplishments and marketing success, Duncan and the Spurs kept rolling right along, never quite passing the torch, as Duncan's message seemed to hint at.

"No, no," James said with a smirk when asked if Duncan faded away like he intimated he would. "So, he lied to me."

James, who recently posted a tweet urging his followers not to take the rapper Kendrick Lamar's greatness, "or anyone for granted," was asked if he falls victim to that mentality himself by not properly appreciating his double-digit scoring streak.

"I would never take myself for granted," James said. "I've been blessed and I've had an opportunity to play with some great guys that have allowed me to help them and they've helped me. I work on my craft a lot and I can't explain the 700 straight games, but I know what I put into the game and sometimes you have things like that."

Cavs coach Tyronn Lue said that James passing Duncan was "a pretty big milestone" but was less impressed with the 10-point streak.

"If LeBron can't get 10 points in a game, I mean, he might need to retire," Lue said. "I don't see that really being a big thing. He should be able to get 10 points every night. But, with Kareem and Jordan, any time you're mentioned in a conversation with those guys, it does mean a lot. So, I was just messing with you."