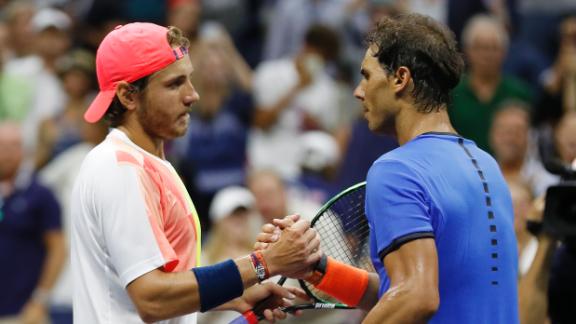 Wearing a shocking-pink baseball cap backward, Pouille stroked a decisive forehand winner down the line and then celebrated by collapsing on the court.

After jumping up, he stuck out his tongue in the direction of his box.

"My first match on the center court against Rafa," Pouille said in his on-court interview. "Yeah, I could not dream better than this."

"There were things I could do better. Had the right attitude. I [fought] right up to the last ball,'' said the No. 4-seeded Nadal. "I can play better. I can play worse. The only thing that cannot be bad is the attitude. Today the attitude was great. That's it."

Pouille joined fellow Frenchmen Jo-Wilfried Tsonga and Gael Monfils in the quarterfinals. It's the first time since 1947 that three Frenchmen have advanced to the final eight in a major. The last time it happened at the US Open was 1927.

Pouille and No. 10 seed Monfils will square off in the quarterfinals.

The match ran 4 hours, 7 minutes, the longest of the tournament on Ashe. The final point total underlined the match's extraordinary competitiveness; both men finished with 156 points.

Nadal, who won the US Open in 2010 and 2013 and has 14 major titles in his career, couldn't reach the quarterfinals in a Grand Slam in 2016. He lost in the first round of the Australian Open. He withdrew after the second round of the French Open at Roland Garros due to a wrist injury that didn't allow him to play at Wimbledon.

This is the first time since 2003 that neither Roger Federernor Nadal will be present in a US Open quarterfinal. Federer wasn't able to play at the Open this year because he is recovering from knee surgery.

It was a difficult Grand Slam season for the 30-year-old Nadal. This was, by far, his best effort at a major in 2016.