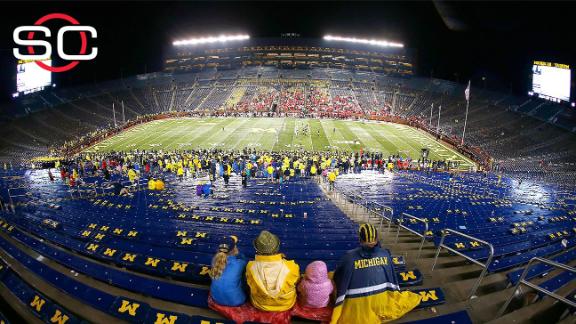 The top tier of college football teams had their worst average attendance this past season since the NCAA began compiling Division I-A -- now FBS -- averages in 2003.

A lackluster season combined with fan apathy resulted in Michiganlosing the attendance title for only the second time since 1974.

The Wolverines had the sixth-biggest drop of any FBS school, as an average of 6,683 fewer fans showed up to games last season versus the previous year. The 104,909 fans per game put Michigan behind rival Ohio State(106,296) -- which saw an increase of more than 1,300 fans per game during its national championship season -- and Texas A&M(105,123).

Texas A&M, which surpassed rival Texasin average attendance for the first time in 2014, saw its attendance rise by 17,998 fans per game, the most of any FBS school. That was thanks to its expanded capacity of Kyle Field, which added more than 22,000 seats last season.

UAB, which cut its football program but is considering reinstating it in the coming weeks, had the second-biggest rise, jumping from 10,548 fans per game to 21,841.

Some programs experienced huge jumps for different reasons. Coming off its national title and undefeated season,Florida Stateaveraged 6,790 more fans per game in 2014, whileMaryland(plus-5,703 fans per game)andRutgers(plus-4,083 fans per game) benefited from their first year playing in the Big Ten.

Arizonaathletic director Greg Byrne, whose football team saw a rise of more 3,000 fans per game this season, said schools are working harder than ever to get fans in the seats as the size of televisions and higher broadcast quality has led some to stay home to watch games.

"We are definitely paying attention," Byrne said. "It is critical that the game-day experience is better for our fans than the television presentation."

Byrne said one of the biggest challenges in coming years will be to engage with the student body and make sure they are coming to games. While that group doesn't necessarily bring in the money now, they certainly are potential future donors to the program.