NBA Power Rankings, Week 2: Where do the Lakers stand after a slow start to the season? 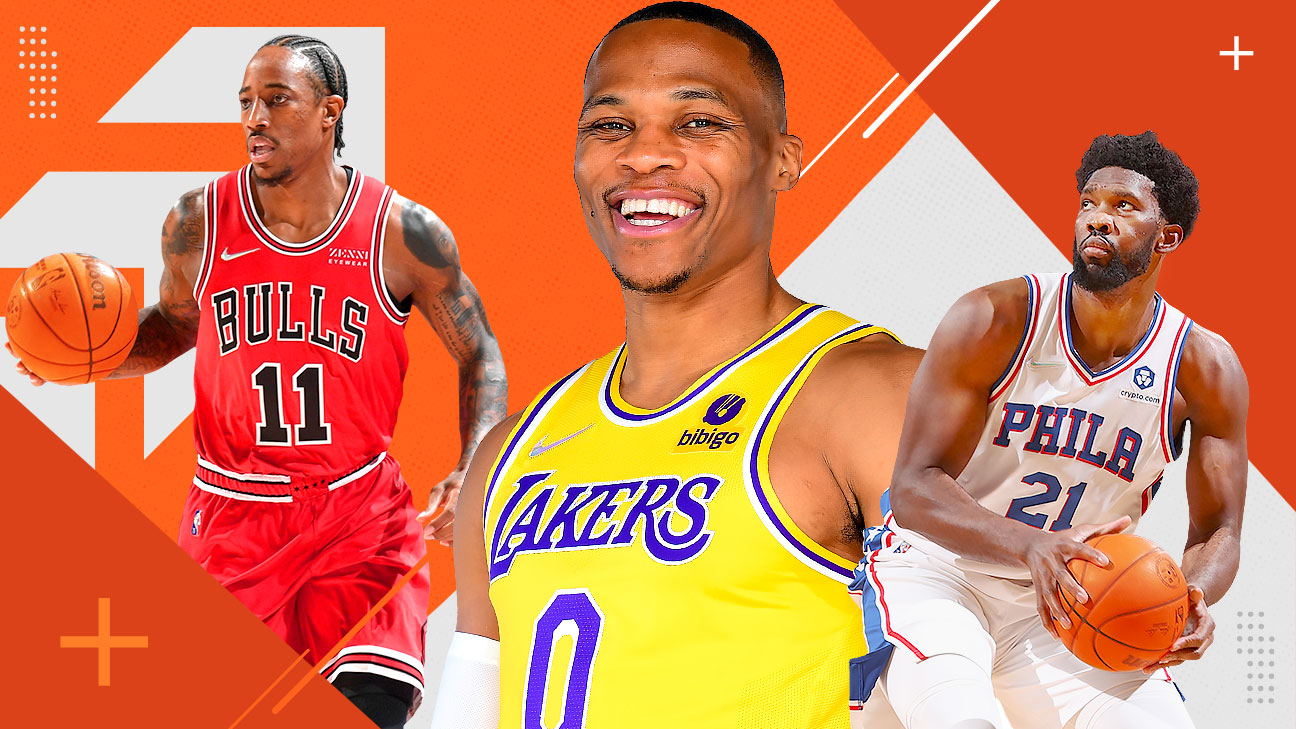 The small sample size of the NBA's opening week usually provides an interesting look at the standings. The start of the 2021-22 season was no different.

The Chicago Bulls and Charlotte Hornets, two teams that missed the Eastern Conference playoffs last season, are each off to 3-0 starts. (The latter spoiled the Brooklyn Nets' home opener on Sunday.) Meanwhile, New York Knicksfans were already calling for a championship run after a season-opening double-overtime win over the Boston Celtics at Madison Square Garden.


In the Western Conference, the Los Angeles Lakers finally notched their first win of the season, overcomingJa Morant's 40-point outburst Sunday night. And behindStephen Curry, the Golden State Warriors are off to a 3-0 start.

Which teams are rising and falling after the first week of NBA action? We're running through all 30 teams.

Note:Throughout the regular season, our panel (Tim Bontemps, Jamal Collier, Nick Friedell, Andrew Lopez, Tim MacMahon, Dave McMenamin and Ohm Youngmisuk) is ranking all 30 teams from top to bottom, taking stock of which teams are playing the best basketball now and which teams are looking most like title contenders.

An opening-night win against the Nets reminded the league why the Bucks are the defending champs. Milwaukee made a statement in blitzing Brooklyn to start the season behind 32 points, 14 rebounds and seven assists fromGiannis Antetokounmpo. Injuries have depleted the Bucks' rotation early on, butJrue HolidayandRodney Hoodboth returned Saturday.Brook Lopez(back soreness) will miss at least Monday's game against Indiana. -- Collier

Hassan Whiteside, the former maximum-contract big man who joined the Jazz for the minimum, is off to an encouraging start asRudy Gobert's backup. He had a total of 14 points, 19 rebounds and three blocks in 34 minutes in the first two games, when Utah outscored its opponents by 19 points with Whiteside on the floor. -- MacMahon

Michael Malone has to be pleased with how his team has started the season withoutJamal Murray. The Nuggets have not given up more than 98 points in their first two games, both wins over the Suns and Spurs. And reigning MVPNikola Jokichas picked up where he left off, averaging 29.5 points and 14.5 rebounds.Michael Porter Jr.is off to a slow start with just 22 points and seven rebounds in two games, but it shouldn't be long before he surpasses those numbers in a single game. -- Youngmisuk

It's been a slow start to the season for Brooklyn, which not only is playing withoutKyrie Irvingbut is treating the start of the season like an extension of the preseason. Coach Steve Nash has said as much in how he's handling his rotations, andJames Hardensaid after Sunday's loss to Charlotte that he's still feeling his way into the season after a long offseason layoff recovering from a hamstring injury. -- Bontemps

Everything is clicking early for Stephen Curry's group, which heads into the week with a 3-0 record. Curry continues to shine as he starts the quest toward his third MVP award. He had 45 points in Thursday's win over the Clippers and continues to give confidence to a deeper group that is getting contributions up and down the roster. VeteransNemanja Bjelica,Andre IguodalaandDamion Leehave given Steve Kerr nice minutes off the bench and third-year guardJordan Poolecontinues to elevate his game offensively. -- Friedell

The Heat started off strong with a demolition of the Bucks to open their season but faded in an overtime loss to the Pacers on Saturday. The good news for Miami is that sharpshooterTyler Herroappears to have found his stride again. He has 57 points combined over Miami's first two games. -- Friedell

Philadelphia was a horrid final five minutes against Brooklyn away from a 3-0 week to start the season. Things with the 76ers -- even withoutBen Simmons--remain the way they've always been: IfJoel Embiidis healthy and available, Philadelphia will win lots of games. -- Bontemps

What a night forCarmelo Anthony. The 19-year veteran moved up to No. 9 on the NBA's all-time scoring list in impressive fashion, scoring 28 points off the bench -- including two free throws to ice it -- to beat Memphis for L.A.'s first win of the season. "He didn't crawl up to that milestone, he blew the doors off of it," Lakers coach Frank Vogel said. -- McMenamin

It may be a small sample, butCam Reddishhas picked up where he left off during Atlanta's postseason run. In four playoff games, Reddish shot 9-of-14 from 3-point range and averaged 12.8 points per game. To start this season, the third-year player is 6-for-9 from deep in two games and is averaging 19.5 points a night. -- Lopez

The new-look Bulls couldn't have asked for a better start. They are 3-0 for the first time since the 2016-17 season, which is also the last time they made the playoffs. Their offense has still had some clunky moments, butZach LaVine,DeMar DeRozanandLonzo Ballhave played exciting basketball. They've been feistier than expected defensively, led by Ball andAlex Caruso's constant pestering. The opening portion of their schedule was soft -- they faced the Pistons twice, who are withoutCade Cunningham, and the Pelicans, who are without Zion Williamson -- so tougher opponents this week in the Knicks and Jazz should provide a better gauge on how good Chicago could really be. -- Collier

It's only three games, but one trend to watch for the Knicks is diminishing minutes forKemba Walker, who went from 36 in New York's double-overtime win to 22 and 19, respectively, in a pair of games against Orlando. He andDerrick Rosewill spend time alternating at the point all season. -- Bontemps

The Mavs' offense sputtered for most of the first six quarters of the season as Jason Kidd tried to figure out how to lessen the load onLuka Doncicdespite Dallas' failure to add another playmaker this offseason. Dallas scored 58 points on 52.3% shooting in the second half of Saturday's win in Toronto with a proven approach: spreading the floor and letting Doncic cook. -- MacMahon

Charlotte couldn't have asked for a better start -- punctuating a 3-0 week with a win over Kevin Durant and the Nets on Sunday.LaMelo Ballhas 48 points, 13 assists, 12 rebounds and seven steals over the first three contests. The Hornets have an interesting showdown withJimmy Butlerand the Heat on Friday, a game that should be a nice measuring stick for what appears to be a young team on the rise. -- Friedell

Ja Morant has picked up where he left off in his brief but brilliant playoff debut, averaging 35 points and eight assists in the season's first week.De'Anthony Meltonhas also impressed, seizing the opportunity to be Morant's backcourt partner in the Memphis starting lineup by averaging 18.3 points while shooting 52.4% from the floor and 57.9% from 3-point range. -- MacMahon

Don't look now, but the Wizards are off to a 2-0 start. AndBradley Beallooks like he has veteran help around him. General manager Tommy Sheppard added depth.Spencer Dinwiddiescored 34 points and had nine assists to lead Washington to an overtime win over Indiana without an injured Beal (hip), whileKyle Kuzmahas averaged 18.5 points and 13 rebounds through two games. The Wizards will look to stay undefeated with a road test in Brooklyn. -- Youngmisuk

The Chauncey Billups era didn't get off to the start the Blazers' new coach had envisioned with a season-opening loss to the Kings, but they bounced back with a 134-105 rout of the Suns.Norman Powellleft that game with a left knee injury, but ESPN's Adrian Wojnarowski reports that it isn't serious.CJ McCollumis averaging 31 points through two games and might have to do even more while Powell is out. --Youngmisuk

Paul Georgeis off to a hot start -- including a 41-point performance against the Grizzlies on Saturday -- but the Clippers are 0-2 after two hard-fought, close losses to Memphis and Golden State.Eric Bledsoehas been better than expected and the Clippers are going to fight every night, but they hope these first two games aren't indicative of how things will go untilKawhi Leonardreturns. -- Youngmisuk

Coach Ime Udoka picked up the first victory of his career Sunday over the Rockets, but the bigger note from the win over Houston wasJaylen Brown's absence with tendinopathy in his left knee. Boston will be hoping Brown, who missed most of training camp after testing positive for COVID-19, can get back on the court quickly after his 46-point outburst in the season opener against the Knicks. -- Bontemps


The Timberwolves are among the league's unbeaten after the first week, taking care of business with a pair of home wins against less talented opponents -- the Rockets and Pelicans (withoutZion Williamson)-- behind some stingy defense. The competition gets stiffer in a hurry this week, with games against the Bucks and Nuggets. -- Collier

After dropping the first two games, the Pacers finally got their first win in overtime against the Heat to start 1-2. They have to be encouraged by the early performance of rookieChris Duarte. He looks like he belongs after averaging 20.3 points per game while shooting 40.4% from the field (45.8% from 3) in his first week. -- Collier

If he hadn't already, rookieScottie Barnesofficially arrived with 25 points and 13 rebounds in Toronto's blowout win over Boston on Friday. While the Raptors' roster doesn't have the high ceiling this season it has been accustomed to in recent years, it does allow Toronto to ensure Barnes gets every possible opportunity to develop. -- Bontemps

Outside of a few Tar Heels die-hards convinced their guy was due, who hadHarrison Barnesaveraging 28.3 points and 10.3 rebounds per game through the first three games of the season? His production has been impressive, but the Kings dropped two out of their first three to start things off. -- McMenamin

San Antonio has had a balanced scoring punch to kick off the new season. Three different players have led the team in scoring in each of its three games --Devin Vassell(19 in the opener against Orlando),Keldon Johnson(27 against Denver on Friday) andDoug McDermott(25 against Milwaukee on Saturday). Johnson leads the team with 20.7 points per game and is one of six Spurs averaging at least 12 points a night. -- Lopez

After starting the season with a pair of 11-point losses to upstarts Memphis and Charlotte, the Cavs got in the W column with an impressive win over last season's surprise Eastern Conference finalist, Atlanta. RookieEvan Mobley(17 points, 11 rebounds, 4 blocks) is already showing signs of the promise that prompted Cleveland to take him No. 3. -- McMenamin

No. 2 overall pickJalen Greenwas held to nine points in each of the Rockets' first two games, but his explosive scoring ability was on display during his 30-point performance in Sunday's loss to the Celtics. Green was 8-of-10 from 3 in that game, finishing one made 3 shy of tying the NBA rookie record. -- MacMahon

In three losses, New Orleans' bench struggled to provide its starters with scoring punch. The bench unit has averaged a paltry 18.3 points per game, by far the worst mark in the league through the first week -- and that included garbage time minutes in the team's first two contests. -- Lopez

The Magic earned a surprising win over the Knicks at Madison Square Garden on Sunday thanks in large part to an impressive performance from second-year guardCole Anthony. The New York City native dropped 29 points, 16 rebounds and eight assists in a 110-104 win. WithMarkelle Fultz(ACL rehab) still out and rookieJalen Suggsstill trying to find a rhythm, Anthony has a chance to make his mark in the short term. -- Friedell

Without Cade Cunningham (ankle), the Pistons dropped their first two games of the season -- both against the Bulls -- looking competitive in the first game at home before getting blown out in the second in Chicago. However, Cunningham's debut could be in sight. There's a chance the No. 1 overall pick could play his first game when the team returns home this weekend. -- Collier

The rebuilding Thunder have lost 29 of their past 32 games dating back to late March. Twenty-two of those losses came by double-digit margins, including all three games this season. Oklahoma City is starting four players who are 23 or younger. -- MacMahon 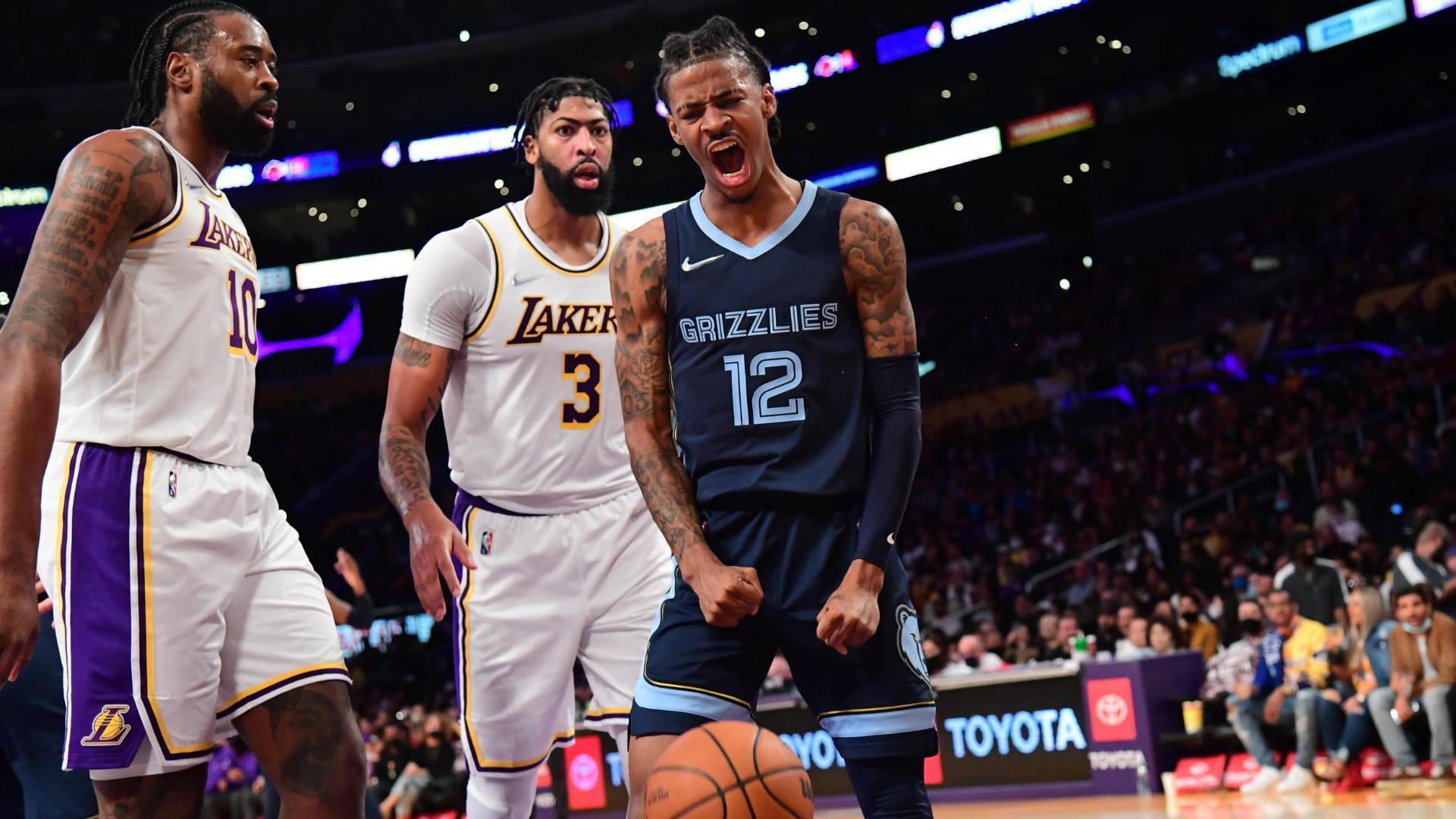