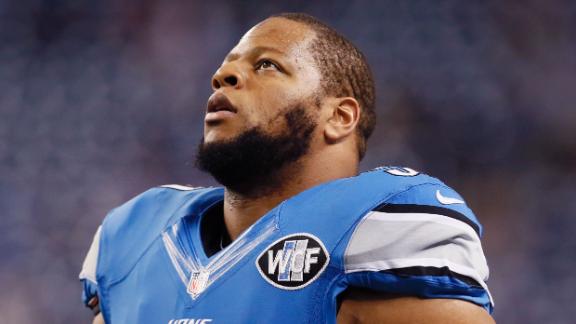 ALLEN PARK, Mich. -- Ndamukong Suh was back with the Detroit Lions on Wednesday after his one-game suspension for stepping on the calves and ankles of Green Bay Packers quarterback Aaron Rodgers on Sunday was overturned, but the defensive tackle did not want to answer any questions about what happened.

Suh said "next question" 10 times in response to nine questions. He was asked why he went to New York for the appeal, how people can trust him, why he ends up in these situations, what he would say to fans, his reaction to the suspension, whether he could actually feel his feet Sunday against Green Bay, whether he should get the benefit of the doubt, whether he didn't mind paying the $70,000 fine because of the magnitude of the game and whether he intentionally stepped on Rodgers, which started all of this in the first place.

When Suh wasn't saying "next question," he answered multiple other questions with saying he just wants to focus on upcoming playoff opponent Dallas and that he is getting ready to prepare to face the Cowboys. Suh did answer questions about the Cowboys, and when he was first asked about understanding why he doesn't get the benefit of the doubt, Suh said "life is life, and so you take it as it is."

He did not want to speculate about whether he was unfairly punished and initially said he didn't know about the letter sent to him telling him about the ruling change that allowed the NFL to treat him as a first-time offender after 32 games without a player-safety fine. When challenged on that, Suh admitted he saw the letter but didn't read the "nitty-gritty" of it.

He also said he was "pleased with the decision and really glad I have the opportunity to go to Dallas and help my teammates win the game, and I think that's most important."

His teammates and coaches were also happy to have him back.

"Obviously, any time you have a guy who does what he does for us, plays great, is a real factor in every game," Lions coach Jim Caldwell said, "it's great to have him back."

Suh was last fined after Week 1 of the 2013 season for a low block against Minnesota Vikings center John Sullivan that cost him $100,000. A fine for hitting quarterback Brandon Weeden later that season was rescinded, allowing Suh to cross the 32-game barrier.

Suh is able to prepare for the Cowboys because NFL appeals officer Ted Cottrell overturned his suspension and turned it into a $70,000 fine after Suh went to New York to make his case. In the meeting, according to ESPN Insider Adam Schefter, Suh said he did not know he was standing on Rodgers' legs because his feet were numb from the cold in Green Bay on Sunday.

Other Lions, including Calvin Johnson, said they could feel their feet Sunday at Lambeau Field but that it was quite cold on the field in Wisconsin. Temperature at kickoff in Green Bay was 27 degrees during the Lions' 30-20 loss.

Suh Focused On Cowboys, Not Rodgers
Ndamukong Suh declined to comment on his initial suspension and appeal, but he was willing to comment on getting ready for the Lions' upcoming playoff game against the Cowboys.

Cowboys Not Worried About Suh
Cowboys reporters Todd Archer and Jean-Jacques Taylor break down why the Cowboys are not worried about the Lions' Ndamukong Suh's presence on the field.

Lions Ready For Cowboys
Lions reporter Michael Rothstein breaks down why Detroit may have a hidden advantage in its matchup against the Cowboys.