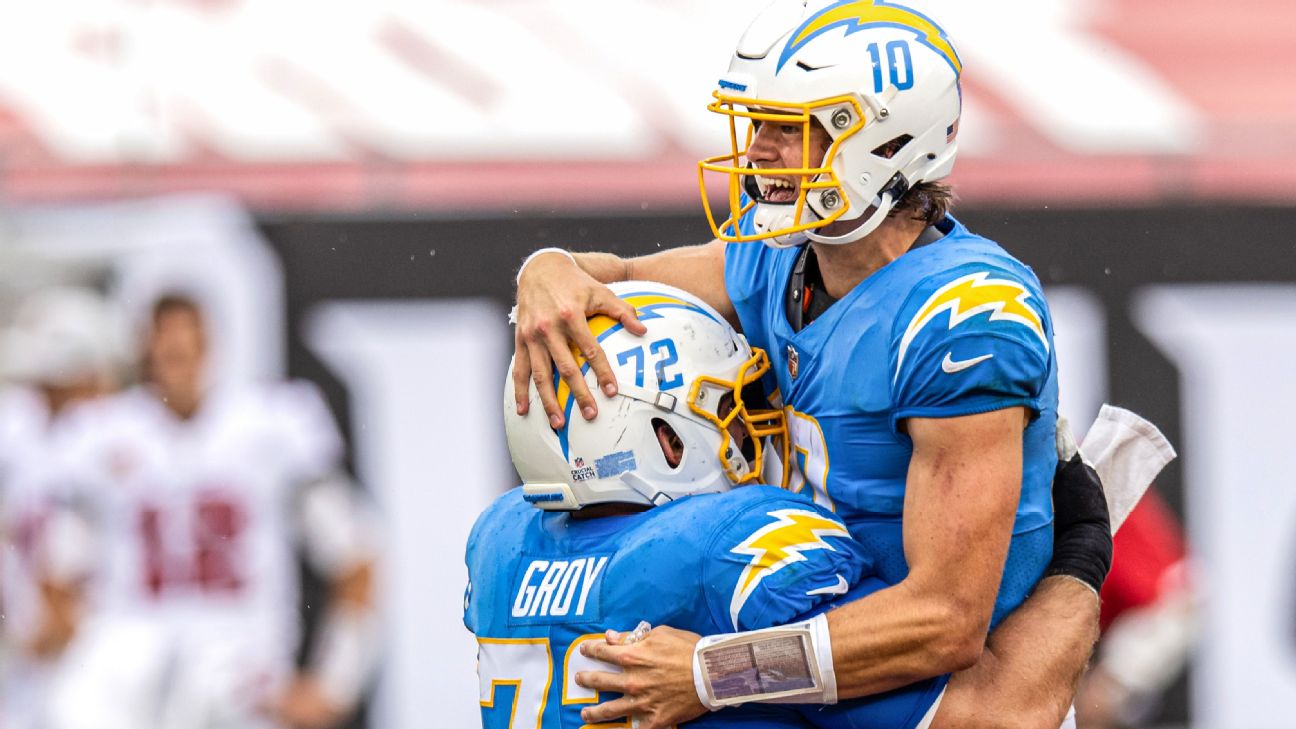 The first eight weeks of the 2020 season have featured, in many ways, the best streak of cumulative quarterback play in NFL history. It has been easy to miss amid daily updates of coronavirus pandemic protocols and super-early coaching changes, but the league's aggregate Total QBR of 65.6 is nearly 10% higher than the next-best mark through the same period of a season since ESPN began compiling it in 2006.

As a result, our midseason quarterback awards will be a bit rosier than in some other seasons. We'll do our best to keep it balanced even while noting there are multiple players performing at an MVP level and a couple of rookies who have blasted onto the scene, using data culled from ESPN Stats & Information and NFL Next Gen Stats unless otherwise noted.

Wilson has thrown an NFL-high 26 touchdown passes, more than any player in NFL history through seven games except for Tom Brady, who connected on 27 in 2007 on the way to 50 for the season.

By now, it's safe to say that Wilson has mastered the art of a chaotic pocket. He has been pressured on 35.9% of his dropbacks, third most in the NFL, in part because he has held the ball for an average of 2.94 seconds before throwing -- the fifth-highest rate in the NFL. But 12 of his touchdown passes have come while under duress, and his next such scoring throw will be the most in a season for a quarterback since ESPN started tracking them in 2009. NFL defenses try to knock quarterbacks out of their rhythm, but Wilson has developed into the league's best off-schedule operator.

Meanwhile, his 38-yard touchdown pass to receiver David Moore in Week 2 continues to hold its position as the least likely completion of the year, based on NFL Next Gen Stats' completion probability algorithm.

Expectations are so high for Mahomes, who turned 25 earlier in the season, that few realize he is playing at a higher level than he did during his 2018 MVP season. His QBR (85.4), completion rate (66.9%) and touchdown-interception ratio (21-1) through the first eight games are all higher. In fact, no quarterback in league history has thrown more touchdown passes with one or fewer interceptions through the first eight games of a season.

About the only negative observation we can make is that six of his touchdown passes have come on high-percentage screen plays, three times more than any other quarterback, as the Chiefs routinely capitalize on their team speed. But someone has to get the ball there, right?

There was a fair bit of apprehension about Roethlisberger's arm when the season began. His 2019 season was cut short by major elbow surgery, and, at 38 years old, it was fair to wonder if he would make it all the way back. Those questions largely have dissipated.

While he ranks behind 21 other quarterbacks in QBR (61.0), Roethlisberger has shown enough arm strength and accuracy to mandate respect from opposing defenses. If there are any questions, check the tape of Roethlisberger's 28-yard strike to receiver Chase Claypool in the Steelers' Week 1 victory over the Giants.

With the Steelers facing third-and-9, Claypool got a step down the right sideline on Giants cornerback James Bradberry. Nickel defender Julian Love sprinted over to help, but Roethlisberger hit Claypool's left shoulder just before he arrived. NFL Next Gen Stats ranked the play as the fourth-least likely completion this season (13.8% probability), largely because Claypool was 0.2 yards away from the sideline when he caught the ball.

Lock's hold on the Broncos' starting job looked tenuous entering the fourth quarter Sunday against the Chargers. The Broncos were trailing 24-10, and at that point, he had managed just one touchdown pass and a 55.2% completion percentage over the course of the season. But Lock then led a stirring comeback, completing 14 of 18 passes for 155 yards and three touchdown passes in a 31-30 victory.

Some of that outburst can surely be attributed to the Chargers' perplexing defensive approach. They blitzed only once in the entire quarter, allowing Lock to spend an average of 2.96 seconds before throwing -- well above the NFL average of 2.73 for the season. Still, Lock bought himself some time and equity in a season the Broncos seemed to have set aside for determining whether he can be their long-term starter.

Joe Burrow has been heroic as the Bengals' much-pummeled starter, and with the NFL's third-most passing yards (2,272), he might well be on the way to winning the NFL's Rookie of the Year award. But voters would be well advised to check out Herbert, who was elevated to the starting job in Week 2.

In particular, Herbert's downfield playmaking has been exceptional. He lets it fly, but with a purpose. Herbert is tied with Wilson for the NFL lead in touchdown passes that travel at least 15 yards in the air (nine), and he leads the league with seven scoring throws that traveled at least 20 yards. As a result, his completions have carried the league's third-lowest completion probability, according to NFL Next Gen Stats.

The Chargers have followed their usual heartbreaking path, losing three 17-point leads already this season. But even if they don't win another game, they can be confident that they hit on the quarterback lottery.

You couldn't ask for a better support toward a rookie making his first NFL start. Bolstered by the Dolphins' defense and special teams, Tagovailoa was mostly a bystander as the Dolphins cruised to a 28-17 victory over the Rams in Week 8. He totaled 93 passing yards on 22 attempts, the fewest by any starting quarterback in a win this season, and attempted only three passes that traveled 15 or more yards downfield. He was also the first quarterback to throw for fewer than 100 yards while wining in his first career start in 21 years (Donovan McNabb, 1999).

We found out that Tagovailoa can take an NFL hit -- he was clobbered on a first-quarter sack that caused him to fumble -- but little else about how his skill set will translate to the pro level. And that's OK. The Dolphins have orchestrated this transition in a smart way. They aren't turning to Tagovailoa to save their season or the jobs of their coaching staff and general manager. They just want him to get live reps within the larger structure of a rebuilding process that is giving them a better chance to win each week than many observers projected. Every team would like to do it this way, but the Dolphins might be in position to actually pull it off.

Mayfield has generated some of the NFL's most polarizing debates this season. Can he get past his first read? Is he better off without Odell Beckham Jr. on the field? Is he on the cusp of breaking through, or are the Browns foolproofing their game plans for him?

On paper, at least, the true Mayfield seems pretty clear. He has been one of the league's better quarterbacks this season when he isn't pressured ... and one of the worst when he is.

Mayfield has been neither hit nor put under duress on 185 dropbacks this season. His 67.4 QBR on those plays is tied for No. 10 in the NFL, courtesy of a 67.4% completion rate and 13 of his 15 total touchdown passes. But when he is either put under duress or hit, or both, Mayfield has posted a 55.7 QBR, which ranks No. 25 in the NFL. On those 57 dropbacks, he has completed 41.3% of his passes for two touchdowns with three interceptions. It's not unusual for a quarterback's performance to drop against pressure, but the disparity for Mayfield is significant and gives opponents a clear lane for limiting his effectiveness.

Not enough people realize that Wentz -- and not the Giants' turnover machine, Daniel Jones -- leads the NFL in giveaways this season. Wentz has thrown 12 interceptions and lost four of his seven fumbles, putting his total turnovers (16) well above Jones' (13).

Nothing else should matter about how Wentz has played, even if he occasionally places a perfectly thrown ball in a key situation -- as he did on a game-winning, 18-yard touchdown throw to running back Boston Scott in Week 7 against Jones' Giants. Frankly, the Eagles are fortunate it hasn't hurt them worse than it has. Wentz's average turnover has cost them minus-3.5 expected points added (EPA), the 12th lowest among 38 players who have committed at least three turnovers this season. In other words, this could all have been much worse.

If you're frustrated seeing a fifth-year veteran like Wentz making these kinds of mistakes, what is your reaction when Cousins -- in Year 9 -- has reverted to nearly the same level? Cousins has committed the NFL's third-most turnovers (11), after Wentz and Jones.

Cousins was a turnover machine early in his career as a spot starter and even after becoming a full-time player. Between 2015 and 2018, he turned the ball over 64 times, tied for fifth most in the NFL over that period. He got it under control in 2019, limiting himself to nine while earning Pro Bowl honors. But Cousins has fallen back into his previous habits in 2020.

It's revealing how the Vikings adjusted after their bye week. With tailback Dalvin Cook back in the lineup, and admittedly a stiff wind blowing Sunday at Lambeau Field in Green Bay, the Vikings made Cousins an afterthought in their game plan. He averaged 1.79 air yards per pass, the second fewest by a player with at least 10 attempts in a game during the past 15 seasons. As Cook compiled 226 all-purpose yards and scored four touchdowns, Cousins' deepest pass of the game went 8 yards past the line of scrimmage. 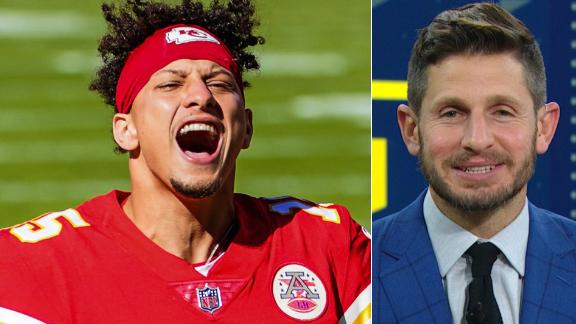 Orlovsky's case for Mahomes winning another MVP
Dan Orlovsky details how Patrick Mahomes could wind up walking away with another MVP award. 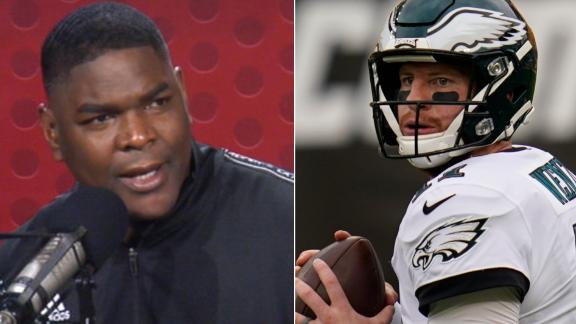