Nick Marshall: 'I made a mistake' 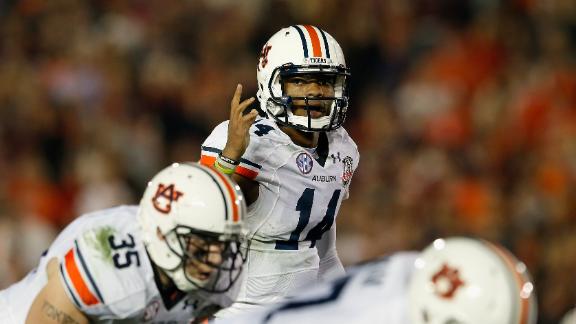 Auburn quarterback Nick Marshall addressed the media Sunday for the first time since he was cited for possession of marijuana on July 11.

"I made a mistake and I'm just trying to gain the trust back from my coaches, my teammates and Auburn's fans," Marshall told reporters. "I'm just going to accept my punishment with open hands.

"The incident that happened is just going to change me and make [me] a better man."

Marshall apologized to his teammates immediately after the incident and said he also had a "man-to-man conversation" with Auburn coach Gus Malzahn in the time since.

"He just told us he was embarrassed and he's going to do whatever he's got to do to get back and help us win games," center Reese Dismukes told ESPN.com at SEC media days.

Marshall was initially chosen to represent the Tigers at media days but was replaced last-minute because of the citation. He will not start the season opener against Arkansas, a decision made by Malzahn and his staff, though there's been no indication as to how much time he'll miss. Backup Jeremy Johnson is expected to start in Marshall's place, but no word has been given.

As a junior, Marshall threw for 1,976 yards with 14 touchdowns and six interceptions. He also rushed for 1,068 yards and 12 touchdowns. Last month, he was named to the watch list for the Davey O'Brien Award, which is given to the nation's top quarterback at the end of the season.

Auburn cornerback Jonathon Mincy, who was arrested for marijuana possession in June, also met with the media for the first time Sunday.

"It was a mistake," Mincy told reporters. "It was a very humbling experience. The biggest thing right now is leaving that in the past and gaining everybody's respect back."

Mincy is also not starting against the Razorbacks to open the season.