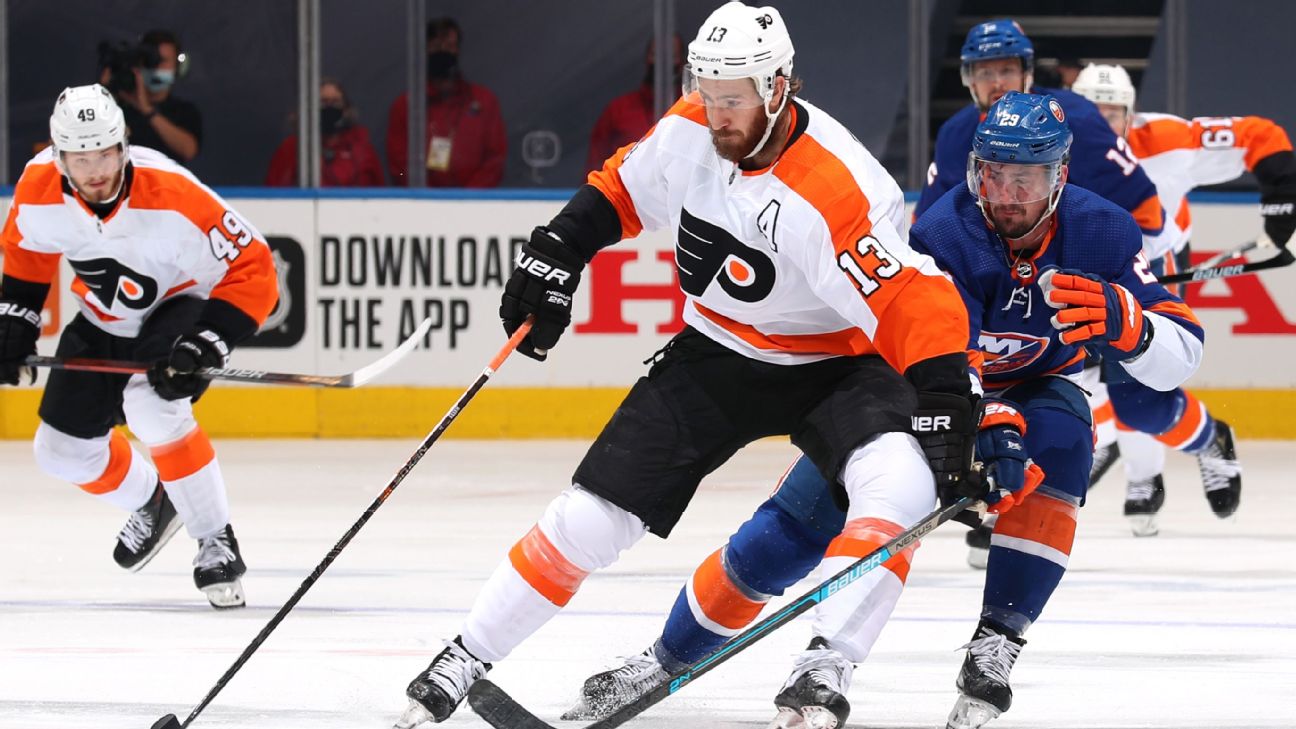 Kevin Hayes said it would be emotional playing his first game back home in Boston since his brother, Jimmy, died in August, but the Philadelphia Flyers forward was grateful for the Bruins' and the community's support as he continues to grieve.

"The Bruins have been amazing with my family and my brother's family," Hayes said on ESPN's The Point, which aired Thursday, "especially Brad Marchand. He has played street hockey with [Jimmy's son] Beau. He went down to the local Dorchester rink and hung out with them, got them sticks, got them pucks. Beau wants to be Kevin Hayes and Brad Marchand every single morning when he wakes up."


Hayes' brother, Jimmy, died Aug. 23 at age 31, with his family saying in October that he hadcocaine and fentanyl in his system at the time of his death. Jimmy Hayes was a local star in Boston, playing at Boston College before becoming the first player born in the Boston neighborhood of Dorchester to play for the Bruins.

Kevin Hayes told The Point that he had been looking forward to Thursday night's matchup after missing Philadelphia's first trip to Boston earlier this season due to injury. Hayes underwent core muscle surgery in September. Team sources told ESPN that Hayes was still not 100% and had been "a warrior, battling through a lot of pain" to be available to play.

The 29-year-old center said the structure of hockey and being around a team environment have been important to him during this difficult time.

"Hockey is the greatest job, the greatest sport of all time. I truly believe that," Hayes said. "To go through everything that happened and the support I got from [GM] Chuck [Fletcher], AV [former Flyers coach Alain Vigneault], [interim coach] Mike Yeo, everyone in the organization, all of my teammates, it was incredible. Even the support from other teams has been crazy.

"If you can't come to the rink and be positive and have a smile on your face and try to help someone else's day ... it's hard not to want to do that. That's basically my main goal every time I come here."


Hayes said that his immediate family would not be at the game but would watch and that he would have plenty of friends and familiar faces in the crowd Thursday.

Over the past three years, after every game, Hayes said he would FaceTime with his brother on his drive home to catch up.

"It's been weird being on the ice and not knowing he's watching," Hayes said. "He was my biggest supporter. He was in the NHL, and he was still telling everyone how good I am and how much better I am than him. It's just a relationship that not a lot of people have."

Hayes described the pride he and his brother had being from Dorchester, which he described as "a small, blue-collar little town where everyone has your back."

"As you get older, you start to realize the impact you've had on people's lives," Hayes said. "Grabbing lunch, people come up to you and say, 'My kid wants to be the next Kevin and Jimmy Hayes.' Teachers that I know send us reports of kids drawing us on their papers, telling their class they just want to be like my brother and I. It's very cool to come home and be in a small little community."
Report a correction or typo
Related topics:
sportsespnnewsnhlkevin hayesboston bruinsphiladelphia flyers
Copyright © 2022 ESPN Internet Ventures. All rights reserved.
TOP STORIES
AccuWeather: Winter Storm Warning For Parts Of Our Area
Police: Delivery driver shoots attempted carjacker 6 times in Philly
Surveillance video shows altercation that led to Coatesville shooting
5-year-old boy found by good Samaritan after boarding wrong bus
Jersey Shore preparing for snowstorm Friday evening
Drexel Wrestling Team is full of brotherly love
Officials investigate homicide after woman found dead inside NJ home
Show More
Delco man lucky to be alive after hit-and-run outside home
'The Ice Age Adventures of Buck Wild' heading to Disney+
Toddler credited with saving family of 7 from devastating house fire
3 charged in assault of NJ man before he went missing
Student burned inside Chester County learning center
More TOP STORIES News