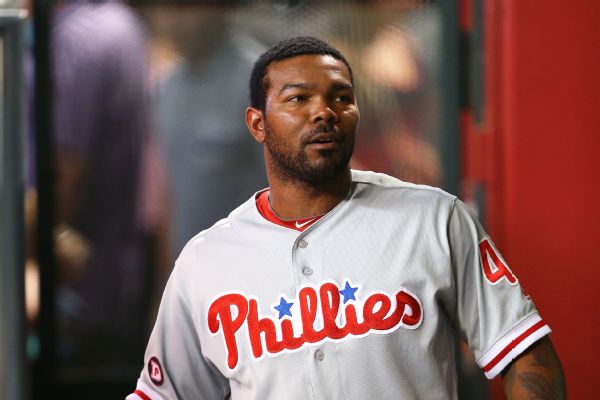 In the trade announced after Baltimore's 8-2 loss in Texas on Friday night, Philadelphia will get an international amateur signing bonus pool allocation, and the Phillies will send cash to the Orioles to cover part of the $6.1 million remaining of Hellickson's $17.2 million salary.

As part of the Kendrick's deal,the Phillies will send about $1.59 million to cover most of the approximately $1.78 million Kendrick is due the rest of this season, and Philadelphia will remain responsible for Kendrick's $5 million in deferred salary.

"It's great because they're in first place and have a good chance to make the postseason,'' Kendrick said Friday night. "That's what we live for. Our ultimate goal as players is to win a World Series. I couldn't think of a better place to be going to.''

Kendrick, 34, is hitting .340 with two homers and 16 RBIs this season, but he has been limited to 39 games due to injuries. He didn't play in Friday night's game after suffering a bruised left hand after being hit by a pitch in Wednesday's 9-0 win over the Houston Astros.

Kendrick has appeared in 24 games in left field, 10 games at second base and one at first.

"I'll probably be hitting eighth or something,'' Kendrick joked. "They've got a good lineup. Those guys know how to play the game. They do a lot on all ends. I'll just have to see where I fit in."

Because of inclement weather and trade speculation, Hellickson was scratched earlier Friday night from his scheduled start at home against Atlanta. Hellickson was pulled about an hour before the game.

Kim, a native of South Korea, hit .232 with one homer and 10 RBIs in 56 games for the Orioles this season. The 29-year-old outfielder hit .302 last year in his major league debut after signing with Baltimore.

Cleavinger has 42 strikeouts over 38 2/3 innings in 27 appearances for Double-A Bowie. The Orioles selected him in the third round of the 2015 amateur draft.