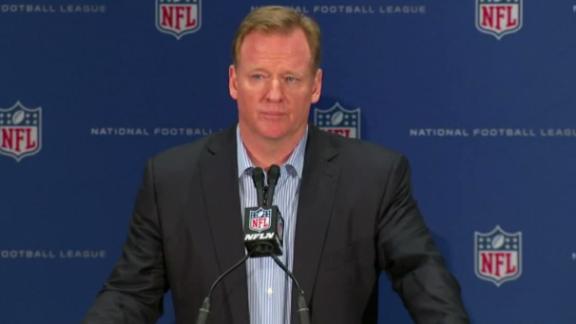 BOCA RATON, Fla. -- NFL commissioner Roger Goodell confirmed he received a letter from New England Patriots owner Robert Kraft asking for the return of the team's draft picks as part of Deflategate penalties, yet he isn't changing the discipline.

"I responded to him two weeks ago and told him that I had considered his views and I didn't think there was any new information in there that would cause us to alter the discipline," Goodell said Wednesday at the NFL's annual meeting at the Boca Raton Resort & Club. "So there will be no change to the discipline."

On Monday, Kraft told reporters that he sent the letter about a month ago.

"I personally believe that when the league made their decision, they did not factor in the Ideal Gas Law. They admitted that publicly. They had a full year of being able to observe Tom Brady play with all the rules of whatever the NFL was, and make any judgments there," Kraft said. "We have laid it out pretty straightforward. And now it's up for them to decide. ...

"They did their own testing, they have results, and for whatever reason, they haven't shared them with any of us. We actually requested at the beginning of the season that they test every game throughout the league and do that, but they chose to do it their way."

Brady's suspension was overturned in federal court. The NFL has appealed.

As for the possibility of a settlement between the NFL and Brady out of court, Goodell said Wednesday, "I'm not aware of that."