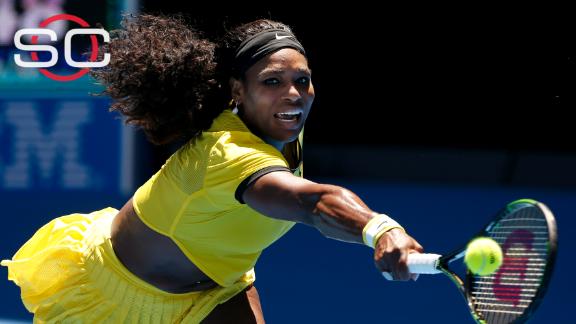 MELBOURNE, Australia -- It's not often that the most dominant player in the world enters a major event with as many question marks as Serena Williamscarried into this year's Australian Open.

But after a four-month layoff following the US Open, Williams suppressed some of those doubts with a tight 6-4, 7-5 win overCamila Giorgion Sunday in the opening round at Oz.

Williams started the match sharply, by taking a two-break, opening-set lead over Giorgi, but the Italian picked up her intensity, which set the tone for the rest of the match.

"I think I served well today," Williams said. "I think, you know, I got broken once, but other than that, I was able to stay focused on that part. And I was able to serve really well, and that really helped me."

Williams escaped the first set, then the match was pretty much dead even in the second, until Williams broke her Italian opponent in the 11th game of the second and held serve at love to close out the encounter.

Williams ended the 1 hour, 45 minute tussle with an ace down the middle, her ninth of the match. She pumped her fist quickly but showed little emotion.

"I have played her a couple of times before and just wanted to be as consistent as I could," Williams said. "Yeah, she definitely doesn't really give you a lot of rhythm, so it's definitely a different match."

Stephens took a 3-1 lead to start the match, but she unraveled quickly. Stephens committed 36 unforced errors, 15 more than her opponent.

The Dane, who reached the semifinals here in 2011, fell 1-6, 7-6 (3), 6-4 to No. 76 Yulia Putintseva in 3 hours, 12 minutes. Wozniacki has plenty of opportunities to take control of the match, but ultimately converted just five of 18 break-point opportunities.

Down to No. 16 in the world, Wozniacki has now failed to get past the second round in four of her past five majors.

When asked about her performance, Wozniacki summed it up succinctly.

For Williams, Monday's victory should provide some confidence, after saying in her pre-Australian Open news conference Saturday that she was "tired" and had a "bad attitude" at practice earlier in the day.

Williams worked out whatever issues she had from the outset of the match. She broke Giorgi in the third game of the match and didn't commit a single unforced error until the ninth game. Williams, who showed little to no frustration during the match, didn't serve spectacularly and converted only 53 percent of her first deliveries, but she won nearly 90 percent of the first serves she made.

Williams had a tougher time than two-time Wimbledon winner Petra Kvitova, who beat Thailand's Luksika Kumkhum 6-3, 6-1 in a hasty 1 hour, 10 minutes. Kvitova, whose season started with a retirement at the Shenzhen Open as a result of gastrointestinal illness, broke her opponent five times and won nearly 80 percent of her first serves.

Last season, Kvitova missed a significant chunk of time because of mononucleosis, but when she eventually regained full strength in August, she played well, including winning New Haven and reaching the final of the WTA Finals.

Williams, sporting a lemon yellow outfit, entered the Australian Open with 21 Grand Slam titles. That's one more than the rest of the field combined but one fewer than Steffi Graf's Open era record of 22. Williams doesn't appear bothered by her quest for more history and the unrelenting pressure that comes with it. On Saturday, she said she has nothing to prove in Melbourne -- she "can only gain."

A year ago, Williams began her season with her sixth title Down Under in a championship that kick-started her pursuit of history. She won the first three majors of the year but lost a chance at a rarefied feat in New York, as surprise semifinalist Roberta Vinci ended Williams' bid for a calendar-year Grand Slam. Shortly afterward, Williams announced she was withdrawing from the rest of the season, as she needed "time to heal" and address her health.

When Williams finally returned to the court two weeks ago at the Hopman Cup, she retired from her first match before withdrawing from the exhibition event citing knee inflammation. Williams downplayed the injury, but the decision opened a lot of speculation as to whether she would be ready for the Australian Open.

"It helped me a lot," Williams said of the time off. "I think I just needed a break. I have been going nonstop since the Olympics in London, and seeing that this is another Olympic year, I kind of wanted to start the year out really fresh and really go at it again as hard as I can. I just needed that time to just recover the best of my ability and get really fit, you know, and really train and get ready for the season."

With temperatures reaching 91 degrees -- and significantly hotter on the court -- Williams didn't look like a player who entered the Aussie Open with a dearth of match play. While Giorgi upped her energy as the match wore on, Williams, 34, showcased her defensive game, thwarting her Italian opponent's aggressive baseline play with agile side-to-side movement. Williams improved her record against Giorgi to 3-0 and will play the Su-Wei Hsieh-Jelena Ostapenko winner in the second round.

Three years ago, Stephens, then 19, reached the Australian Open semifinal. But her promising journey soon turned into a roller-coaster. She ended 2015 ranked No. 30, and the past two years, she failed to escape the fourth round of any major.

Stephens, however, started 2016 with a win in Auckland, her second career title, and there was little indication she would struggle in Melbourne. She had plenty of chances against Wang but converted only two of 14 break-point opportunities.

"I think definitely after Auckland, everybody was like, 'Oh, we need to support Sloane again. She's playing good, and we need to get back on the bandwagon because we kind of abandoned her.' And then I lose, and they go back to, 'Oh, she doesn't work hard. She's not committed. She doesn't love the game,'" a relatively upbeat Stephens said after the loss. "And for me, I'm never going to win because it's always going to be like, 'She's great,' and then, 'She's not committed.' 'She looks great this week,' and then, 'Ohhh, she lost to someone who wasn't seeded.'

"It's kind of a back-and-forth type situation. And there's some negative, like, 'Oh, she looks fat today,' or 'Now, she looks too skinny.' There are so many things people can say, and most of them are not true because the only thing you know about me is what you see on the court when I play. I'm human, so I have my bad days. I think for me, just learning to accept the criticism, good or bad, has been a struggle but something I have learned to do.''